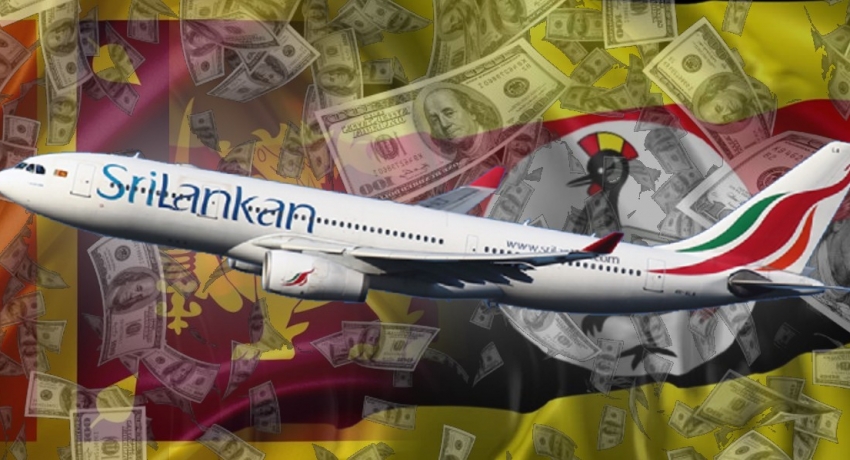 COLOMBO (News 1st); SriLankan Airlines on Thursday (14) said it received an air cargo order to transport about 102 tons of printed material from Colombo to Entebbe International Airport in Uganda in February 2021.

The consignment was purely commercial in nature and brought in much-needed foreign revenue to the airline and country at the time. SriLankan wishes to emphasize that this cargo order was undertaken for commercial reasons only, it added.

The details of the cargo consignment were withheld due to contractual obligations as per air cargo industry standards said the statement.

However, in response to concerns raised following the statement the national carrier tweeted to say that the Ugandan government ordered Ugandan currency notes from a global security printer who operates several factories worldwide, including one in Sri Lanka, exporting to global markets.

It went on to note that SriLankan aircraft which were underutilised at this time (2021) during the pandemic were chartered by a UK based freight forwarder.

A tweet by the Airline Pilot’s Guild of Sri Lanka on the 23rd of February 2021, revealed that SriLankan Airlines operated three consecutive cargo flights to Entebbe in Uganda.

Sri Lankan Airlines said what is now being misunderstood is the Airline Pilots Guild proud announcement of this achievement of using unutilized pax aircraft.

The most recent of these events was when Sri Lankan Prime Minister Mahinda Rajapaksa travelled to Tirupati, India on pilgrimage, in a private jet.

This particular jet was leased for a very high price, and it arrived at the Ratmalana Airport for the Prime Minister to travel to India, from the Entebbe International Airport in Uganda.

Startling details of this particular jet were revealed by the Frontline Socialists Party in late 2021.

The Frontline Socialists Party on the 28th of December 2021 said that the private jet used by the Prime Minister to travel to India on pilgrimage had a flight history that is a cause for concern.

Pubudu Jagoda said that after reaching Sri Lanka on the 16th of December, the private jet had flown to Cochin and Chennai in India on two separate occassions, before reaching the country once again.

Jagoda pointed out that the around Rs. 32 Million was spent for this priate jet, and raised concerns as to why the Prime Minister of Sri Lanka would resort to using a private jet, when he could have easily used a passenger plane.

UGANDA TO BE BLACKLISTED

Uganda’s financial industry risks being blacklisted by international systems for failure to put in place measures that can effectively prevent financial crimes like money laundering.

This is a requirement by the Financial Action Task Force (FATF), a global inter-governmental organisation on the initiative of the G7countries to develop policies to combat money laundering and terrorism financing.

Uganda was put on the ‘Grey List’, a list that shows the performance of countries regarding the safety or level of risk of their financial systems.

This came after the FATF declined to adopt Uganda’s Money Laundering and Terror financing risk assessment report done by the Ministry of Finance, the Financial Intelligence Authority (FIA) and some NGOs in 2018.

This was what the European Union based on to blacklist Uganda’s financial sector.

To avoid being downgraded to the “Blacklist”, Uganda must submit a revised report by May 2022, showing improvements responding to the gaps that were cited in the current report.

Former Parliamentarian Hirunika Premachandra, the National Organizer of the Samamgi Vanitha Balavegaya told reporters on Friday (15) that rumour has it that all the money looted from the people were moved to Uganda.

She said based on the calculations of the weight of the currency that was supposedly airlifted by SriLankan Airlines Cargo, approximately 10 Million US Dollars have been moved out.

Concerns are mounting in the country over the transactions taking place between Sri Lanka and Uganda, an African country with so many issues concerning finances and monetary security.