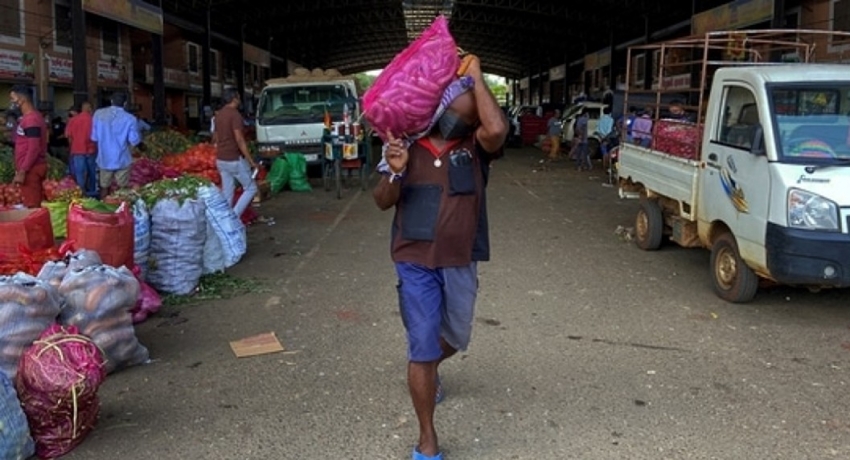 COLOMBO (News 1st); The continued depreciation of the rupee has landed a heavy blow on the country’s economy.

Today, the US dollar is selling at 320 rupees at commercial banks.

Official data show that the Sri Lankan Rupee has depreciated by 58 percent in a month from the 8th of March.

The depreciation has caused a shortage in goods and even caused prices to sky-rocket in the market.

Frustrated citizens are now taking to the streets against the unbearable cost of living.

However, elected public representatives are debating party politics in Parliament.

This raises questions on whether authorities can resolve the problems faced by the people.

For more than a year, the central bank capped the exchange rate of the US dollar at 202 rupees, ignoring calls by economists to allow it to float.

However, the result was catastrophic.

How well the responsible authorities managed the economy as they began easing restrictions in 2021 remains a question.

However, 20.6 billion US dollars had been spent on imports during that period.

The deficit in the trade balance was 8.1 billion US dollars.

But why did Sri Lanka incur such a high import bill?

Official data show that about 6 billion US dollars had been spent to import fuel, food, and medicines.

The remaining 15 billion US dollars had been spent on other imports.

The government decided to curtail the expenditure on non-essential imports only at the beginning of this year.

The decision was made as the country’s foreign reserves slid to about 2 billion US dollars.

Even amidst the COVID-19 pandemic, Sri Lanka received 7.1 billion US dollars in workers’ remittances in 2020.

The drop in workers’ remittances of about 2 billion US dollars, was attributed to the cap on the low exchange rate.

These restrictions prompted expatriate workers to remit money to the country through informal channels.

Although Sri Lanka receives about 600 million US dollars in workers’ remittances monthly, this had dropped to about 259 million.

Wouldn’t have authorities been able to prevent this situation if the central bank had allowed the exchange rate to float?

As Sri Lanka’s foreign reserves began depleting, the government had to seek assistance from other nations to repay its debt.

Those in responsible positions ignored calls by economic experts to seek the assistance of the International Monetary Fund to avert a crisis.

They even outlined a 6-month roadmap for the economy.

Although the government used its reserves and loans from foreign nations that ran up to 4.8 billion US dollars to repay its debt last year, the situation this year is different.

What is the reason for the worsening crisis?

Sri Lanka has to repay around 7 billion US dollars debt this year.

However, another 1 billion US dollar International Sovereign Bond is to be settled in June.

Will Sri Lanka be able to pay its debt using its existing foreign reserves which stand at about 1.7 billion US dollars?

The Sri Lankan Rupee continues to depreciate after the central bank allowed the exchange rate to float in March.

The continued depreciation of the rupee has caused the cost of goods to sky-rocket in the market.

This has even resulted in the shortage of fuel, gas cylinders, milk powder, medicines, and other essentials, which had prompted people to launch a mass wave of protests around the country.

The government which remained upbeat on its policies has now decided to seek the assistance of the International Monetary Fund.

Sri Lanka’s finance minister is due to fly to Washington to hold talks with the IMF next Monday (11). However, there is neither Finance Minister nor Finance Secretary appointed at present.

The Financial Times reported that the Sri Lankan rupee is now the worst-performing currency in the world.

The Asian Development Bank has also projected the country’s economic growth to drop to 2.4 percent this year.

Shouldn’t attention be paid to resolving this problem that is worsening by the day?