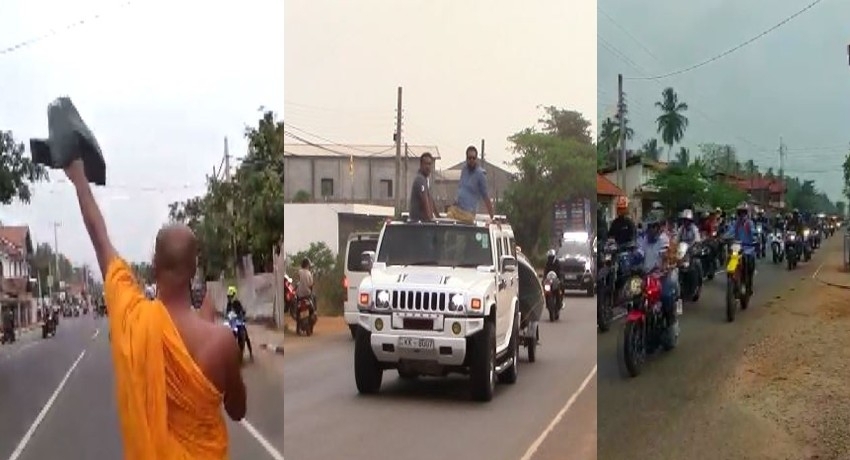 COLOMBO (News 1st); Minister Namal Rajapaksa did not assist the cycling tour that was held in Kalpitiya on Thursday (17), tweeted his Media Division on Friday (19).

It said that “No assistance was given by the Hon. Minister @RajapaksaNamal or the @MoYS_SriLanka for the cycling competition held in #Kalpitiya today & it has been organized by a private entity which has no affiliation with the Ministry of Sports.”

On Friday (18) Spin Riders Club told a media briefing that the tour was in fact organized in January for March, and during the organizing stage, there was no fuel crisis in Sri Lanka.

Sajina Sithmala representing the Spin Riders Club said the group had already made payments to the tune of Rs. 1.5 Million for hotel accommodation, and therefore the event could not be delayed.

“For 10 years, we go on this tour during the New Year. During the tour we engage in a social wellness campaign. This year we donated Rs. 1.2 Million for the Apeksha Hospital and will be donated stationery worth Rs. 500,000/- for school students in Kalpitiya,” he told reporters.

Spin Riders Sports Club said the tour was not connected to the Sports Minister and was attended by car and motorcycle enthusiasts.

Nilupul Theeksana, also respresenting the club said that members were also in line at filling stations for fuel.

“When we’re moving bowsers were also there. So, people used it for political objectives and blamed it on us,” he said denying any political connection to the tour.

The Police Media Division in a Press Release issued this morning (18) noted that while “conditional permission” had been granted for a “vehicle parade”, the police had banned the parade due to public outcry and the flouting of conditions agreed to.

Police have assured that legal action would be taken if road rules were broken. The video circulating on social media shows many SUV’s had passengers dangerously hanging out of open windows.

The convoy, which was flanked by a considerable police escort, was met with stiff resistance at the Kalpitiya town, where residents and religious leaders blocked the road preventing the convoy from moving ahead.

“The People in this area, have no fuel. We are all in a desperate situation. How come these people have fuel to waste like this?” was the question, a Buddhist Monk had when he led a protest against the convoy from passing the town of Kalpitiya.

The Press Release adds that the Spin Riders Club had made the request for permission for the Vehicle Parade that would run parallel to a charitable donation made to the Maharagama Apeksha Cancer hospital as well as a donation of supplies to a school in Kalpitiya.

Permission had initially been granted by police for the vehicle parade to travel from Mirigama to Kalpitiya and then on to Anuradhapura from between the 17th and 19th of March.