COLOMBO (News 1st); CCTV footage has emerged over the murder of the Grama Niladhari Officer from Ambanpola, a crime that was solved by Sri Lanka Police in 24 hours.

On the 5th of October, Sri Lanka Police arrested a Railways Station Master from Galgamuwa for orchestrating the murder of a Grama Niladhari Officer.

A confession by the suspect revealed, that a land dispute led to the murder.

According to the investigation, the land in question was owned by the suspect’s wife and the deceased Grama Niladhari Officer had intervened to solve the matter, and the opposing party had gained the advantage in the matter.

Thereafter, the suspect had hired three men to kill the Grama Niladhari Officer for Rs. 70,000/-.

The Grama Sema Officer from Ambanpola was found dead on the 4th of October and it was ruled that he was either run over by a vehicle or stabbed to death.

Sri Lanka Police suspected that he may have been knocked down by a car when riding his motorcycle and thereafter run over. 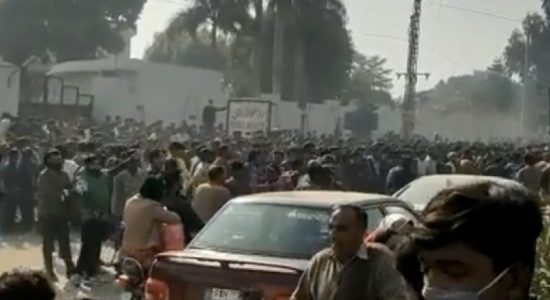