S W R D Bandaranaike was the fourth Prime Minister of Sri Lanka serving from April 1956, when his party, the Sri Lanka, Freedom Party, won a landslide victory at the general election, until his death at the hands of an assassin in September 1959. 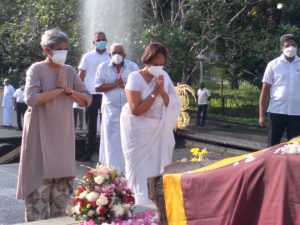 Former President and daughter of SWRD Bandaranaike, Chandrika Bandaranaike visited the Horagolla Memorial on Sunday (26) morning to pay tribute to her late father.

She reprimanded the Former President who is also the present SLFP Chairman for only visiting the memorial one during his five-year tenure as the Head of State. 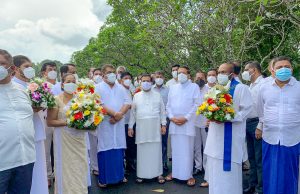 After she left, the Sri Lanka Freedom Party led by its Chairman Former President Maithripala Sirisena paid tribute to the late founder of the SLFP.

“The greatest respect we can give to the late SWRD Bandaranaike is to follow his vision and policies,” said Sirisena.

He assured the Bandaranaike policies will be carried forward by the Sri Lanka Freedom Party.

“The present government shows no regard for the Bandaranaike Policies,” said Welgama adding that the Government adopts the Rajapaksa policies.

He slammed the government for working to please their associates, adding that the public coffers are managed by a handful of people.