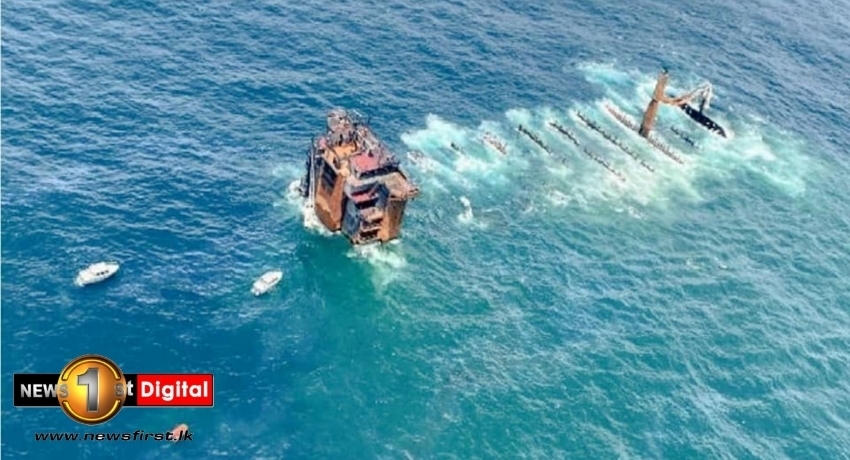 COLOMBO (News 1st); The report of the UN Environmental Advisory Mission on the X-Press Pearl Maritime Disaster has recommended that the Government of Sri Lanka should nominate a qualified representative/team to oversee the work of the company that will be commissioned to remove and decommission the wreck and the containers.

The report said that the oversight duties of the Government’s representative/team should include inspection of the wreck, containers, and debris removal, and confirmation that all work areas are returned in a clean and satisfactory condition to their owners.

The wrecked MV X-Press Pearl and the lost containers at sea pose the most immediate risks of this gradually unfolding incident, warned the UN report.

A plan to eliminate these risks by the removal of the wreck and containers, and their eventual decommissioning, should be prepared as soon as possible and this plan should be subject to a peer-review process and approved by the government.

The limited but continuous release of oil from the wreck represents an evolving threat to the marine environment and necessary control measures should be put in place for a ‘worst-case scenario’ of a sudden release of a large volume of bunker oil, it added.

In addition, it recommended that a plan should be developed and implemented to set up a monitoring to detect the release of chemical pollutants from the wreck and lost containers in its vicinity.

This is also needed to ensure the safety of divers and underwater surveillance equipment before initiating the wreck inspection. For this purpose, a biomonitoring programme using caged marine organisms (e.g. bivalves) is recommended as a relatively simple and cost-effective option. In addition, monitoring of standard water quality parameters (pH, dissolved oxygen, nutrient concentration) should be regularly conducted to control for stratification in the water column.

As the single largest plastic spill, it would be valuable for Sri Lanka to document its clean-up experience and share its learnings with the international community, recommended the UN adding that the event could also serve as an opportunity to call for a review of international regulations on plastic pellet packaging, storage and maritime transportation with relevant international organisations.

Further, the UN report recommended that an assessment to determine the cause of the mass turtle and other marine mammal mortalities should be carried out by qualified medical veterinarians.