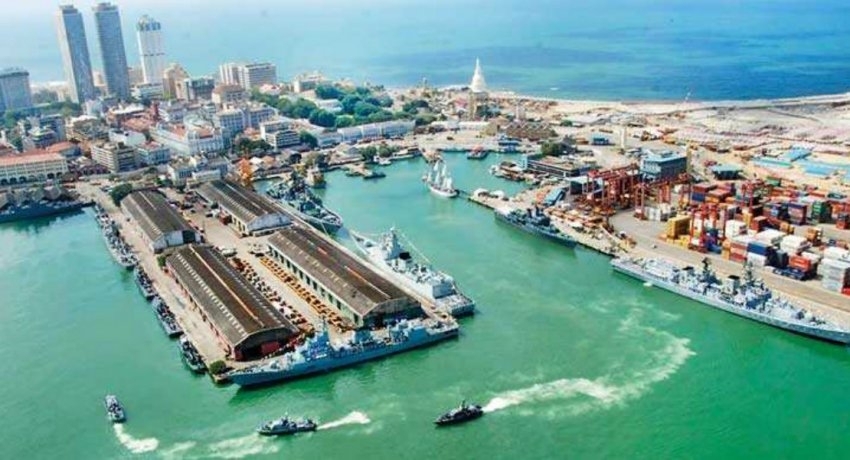 Colombo (News 1st);  Plans are in place to commence construction of the East Container Terminal under the Colombo Port South Harbor. Development Project.

ECT is identified as a deepwater port and it would be able to accommodate even the largest vessel in the world.

The Sri Lanka Ports Authority had completed the groundwork for the construction using loans obtained from the banking sector in Sri Lanka.

Three Gantry Cranes imported from China were unloaded at the behest of the Trade Unions, however, concerns have been raised as to why operations are not taking place at the much important ECT.

The Ex-Minister of Ports & Shipping and Southern Development Sagala Ratnayake inked a Memorandum of Cooperation with the Governments of India and Japan for the development of the Colombo South Port in Sri Lanka.

According to the document, ECT will be developed using a Yen Loan from the Government of Japan under highly concessional conditions by the Sri Lanka Ports Authority.

Further, the Memorandum of Cooperation notes the three governments would set up a Terminal Operations Company or TOC for managing the ECT.

According to the MOC, a stake of 51% of the Terminal Operations Company or TOC belongs to the Government of Sri Lanka under the Sri Lanka Ports Authority.

However, Johnston Fernando the present Minister of Ports and Shipping on the 09th of June producing a cabinet paper said it is not possible to proceed with the MOC reached by the Former Government.

The Cabinet Papert notes developing ECT by obtaining a Yen Loan will not be beneficial to the country.

The Cabinet Paper also goes on to note, at a time when the government is facing a debt crisis and is seeking more time to repay international debt, it is not possible for the Government of Sri Lanka to obtain more loans.

The Minister proposes to the Cabinet of Minister, ECT requires Foreign Direct Investments and says India’s Adani Ports and Special Economic Zone Limited (APSEZ) has come forward in partnership with a local company to develop and operate ECT.

The Cabinet paper proposes for ECT to be developed and operated as a Public-Private Partnership for a period of 35 years.

According to Minister Fernando’s explanation, the loan capital of the Sri Lanka Ports Authority could be settled through dividends set off commencing from the first year of the project.

The Cabinet Paper adds the rental value for a period of 35 years could be recovered upfront and the Sri Lanka Ports Authority could use such proceeds to retire SLPA loans to the Government or State Banks.

It also seeks to appoint a Cabinet Appointed Negotiation Committee (CANC) consisting of 05 members to evaluate the proposal within the MOC agreement.

According to the Cabinet Paper, the presence of Japan and India in the Colombo Port will improve its business outlook and value through transshipment activities drawing Indian and Japanese Cargo.

It is now clear, Adani Group – one of India’s largest conglomerates is preparing to get involved in the project for the development of ECT.

On the 20th of January 2020, the Indian Congress Party accused the Modi-led government of “favoring” the Adani group in the 45 Billion Indian Rupees Submarine project, alleging it was promoting its “crony capitalists”.

Indian media also revealed from time to time about the project given to Adani Group by the Modi-led government, which raised serious environmental concerns.

Concerns have been raised as to why India’s Adani Group is showing interest in the East Container Terminal of the Colombo Port.

The Colombo South Port is currently operating with a company in which China holds a major stake, and a similar situation remains with the Hambantota Port as well.

Though on the face of it, the Sri Lanka Ports Authority holds a major stake most of the profit-making areas in the port are held by China.

Plans have already been put in place to further expand operations at both ports including transshipment activities with companies maintaining close ties to China.

The Belt and Road Initiative, formerly known as One Belt One Road, is a global development strategy adopted by the Chinese Government to link land and sea areas.

For the Indian Ocean region, China proposes to revive the ancient Silk Road.

The Chinese terms this as The String of Pearls, a geopolitical theory on potential Chinese intentions in the Indian Ocean region.

It refers to the network of Chinese facilities and relationships along its sea lines of communication, which extend from the Chinese mainland to Port Sudan in the Horn of Africa.

The Chinese have already started work to update the existing ports in those countries and Hambantota is one such strategic position.

Under the ‘Sagar-mala’ project, initiatives include building new ports and modernizing old ones along the coast of India.

When taking a look at these objectives, securing a stake at ECT in the Colombo Port would strengthen India’s vision to counter China’s strategies.

In 2019, Ambassador Alice Wells the Acting Asst. Sec. for South & Central Asian Affairs at the U.S. Department of State pointed out India and the US follow similar policies.

“Both India and the United States believe in free and open Indo Pacific region. First, we are worried about China’s ambitions and aggressions as manifesting themselves in the Indo Pacific. We have in bilateral and quadrilateral sessions that we do with India, Japan and Australia we are working on practical steps that can take to coordinate on our finance development. Practical steps to make sure our assistance programs USAID or the MCC in helping to promote regional connectivity. President will be meeting PM Modi and Abe in Japan at the G20 and we have an opportunity to highlight this new partnership,” said Ambassador Alice Wells.

Doesn’t this mean both India and the United States of America operate as one?

One side it’s China, on the other it’s India with the USA.

Sri Lanka is caught in the middle of an International Power Struggle.