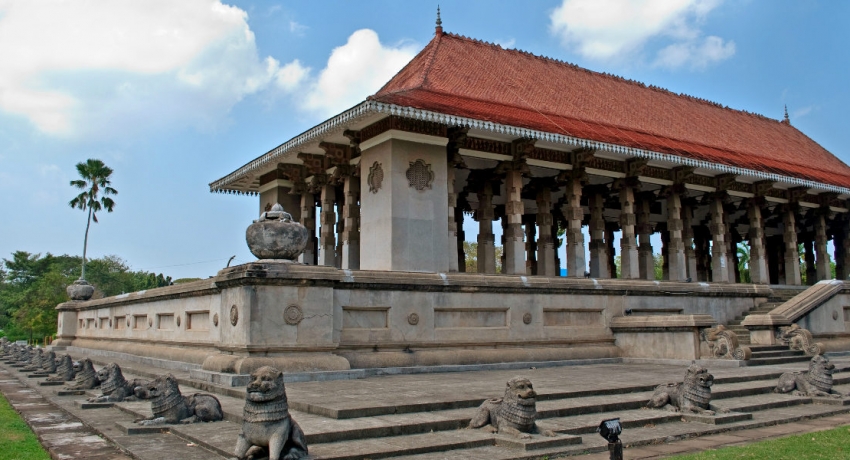 Did you know the history behind the Independence Square?

Did you know the history behind the Independence Square?

Colombo (News 1st): This year’s independence day celebrations were held at the Independence Square in Colombo. This is a report on the rich history of this monumental location.

Independence Memorial Hall was built to commemorate the independence of Sri Lanka from the British rule in 1948. Made to the request of Prime MinsterD.S. Senanayaka who commissioned the building. It is said that he wanted a monument “worthy of this country’s long and impressive history”.

The building was designed by a group of eight notable architects led by Tom Neville Wynne-Jones. The most prominent feature of the monument, the assembly hall, was inspired by the royal court of the King of the last kingdom on the island, Kandy “Magul Maduwa,”

Every architectural square inch of this monument is filled with lavish symbols of the island’s rich history and political freedom.

The four menacing stone lions with protruding eyes were recreated from the lion statues of the 13th century Yapahuwa kingdom.

The hall was built at the location where the opening ceremony of the first parliament was held under the auspices of late Prince Henry, Duke of Gloucester. During the first few years after gaining freedom from the British, the independence day ceremony was held at the Independence Memorial Hall.

It served as the ceremonial assembly hall for the Senate of Ceylon and the House of Representatives of Ceylon until the parliament was moved to the new parliamentary complex.

The hall is an open-sided rectangle with ornately moulded cement columns and a tiled, hipped roof with statues of seated lions surrounding it, used for ceremonial occasions. In its basement is the Independence Memorial Museum.