PM admits his involvement in the collapse of Sri Lankan Airlines

PM admits his involvement in the collapse of Sri Lankan Airlines

Colombo (News 1st) – Speaking at a forum held in Colombo last evening (September 23), Prime Minister Ranil Wickremesinghe admitted that government interference was a cause of the losses suffered by SriLankan Airlines.
Responding to a question posed at a forum moderated by CNN’s famed business correspondent Richard Quest, Prime Minister Ranil Wickremesinghe commented on losses suffered by SriLankan Airlines.
The Prime Minister’s statement was reported widely in this morning’s newspapers.

Given the more than a billion-dollar debt burden that has been placed on the nation, it is important to identify who exactly interfered at SriLankan Airlines.

The public will recall the manner in which an economic management sub-committee was appointed going above the cabinet of ministers and chaired by the Prime Minister following the change in government in 2015. It was this economic management sub-committee led by the Prime Minister that has guided the cabinet through all decisions related to SriLankan Airlines.

Suren Ratwatte, the brother of one of the Prime Minister’s closest advisors, was appointed CEO of SriLankan Airlines and the national carrier was administered on an apparent whim and fancy aggravating the burden on the country. It was during this timeframe when the Prime Minister’s friend and advisor’s brother ran the airline that European long-haul routes were terminated, aircraft orders were cancelled with billions being paid out in compensation and persons who rendered no service to the airline were recruited for exorbitant salaries. Eventually, Suren Ratwatte left the airline collecting a major bonus for the months remaining on his contract and took a flight to Australia with zero regards for the state of the airline that was under his management.

This should make it exceedingly clear regarding who was, in fact, responsible for interference at SriLankan Airlines. The manner in which the Prime Minister slinked, sidled and edged his way into not only SriLankan Airlines but almost every aspect of the state is still fresh in the collective public memory.

In 2015, he was able to become Prime Minister, without having a majority in parliament. Immediately upon taking office, the Central Bank of Sri Lanka was removed from the purview of the Finance Ministry and placed under his Economic Development Ministry. He secured the appointment of his long-time friend Arjuna Mahendran as Governor of the CBSL, in spite of the objections raised by the cabinet. The system utilized for the issue of sovereign bonds was manipulated, allowing for not one but two bond scams in 2015 and 2016. A committee of loyalists were subsequently appointed to cover-up the scam.

Furthermore, fairytale FDI projects were greenlit including the Oil Refinery in Hambantota, the Volkswagen factory in Kuliyapitiya and the tyre factory in Horana. The Hambantota Port was sold off to China, claiming some vague benefit for the country. A Public-Private Partnership Unit that was put together outside of the authority of the Board of Investment. The lease of a building in Rajagiriya for the Agriculture Ministry which enriched friends and henchmen.

Notwithstanding the economic impact of these interventions, it is also important to recall the hatchet-job carried out on the governance structure of the country. Shrewd amendments and revisions were included in the 19th amendment to the constitution to curtail the powers of the Presidency rendering the country nearly ungovernable.
Not forgetting the attempt to create another constitutional crisis by attempting to abolish the executive presidency when faced with certain defeat, claiming that it was called for by Civil Society.

Given that the Prime Minister has admitted that government interference has led to the collapse of SriLankan Airlines, will he be held accountable for the many crises that have been caused by his interferences?

Is it not the country and its people that he is humiliating before an international journalist and the local and international business community?

Meanwhile, General Secretary of the SLFP Dayasiri Jayasekara made the following revelations at a media briefing held earlier today (September 24).

He produced the cabinet papers with the signature of the Prime Minister. He emphasized that rather than presenting it at the Cabinet the Prime Minister has taken them and left the meeting because of discord that arose in the pre-cabinet meeting that was held at 2:00 pm. “As a result of the ongoing crisis within the UNP, the prime minister did not present these papers to the cabinet”, he added. He further requested to refrain from framing the President for the ongoing crisis. “This disagreement started with the President and the Prime Minister. We kindly ask them to not to destabilize the country anymore and sort this crisis and end it with the Presidential elections”, he continued. 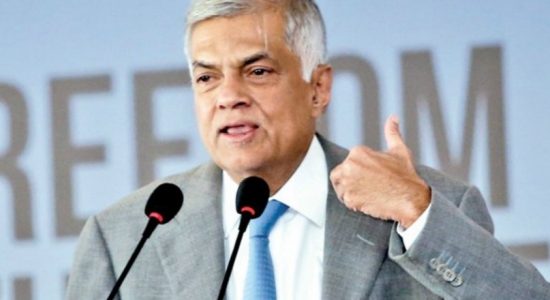