COLOMBO (News 1st): A special Sangha meeting themed “Daye Samaya Surakshawa Udesa Hela Bikshu Wanshaye Punaragamanaya” was held in Matugama today (June 29). This special Sangha meeting was chaired by the Anunayakas of the Malwatte and Asgiriya chapters and was attended by the Maha Sangha representing the three sects. The historic Matugama Convention was unveiled today (June 29) which includes a resolution aimed at securing state security and eradicating Islamic extremism.

Speaking at the event, the Anunayake of the Asgiriya Chapter Venerable Dr Madagama Dhammananda Thero stated that according to Minister Mangala Samaraweera that every cloud has a silver lining because even with the tragic attacks on the 21st April he had mentioned of the fact that the country received US$ 480 million from the US.

He further said that at every instance when the country faces a tragic incident that the politicians attempt to take political advantage. He went onto say that similar to the Counter-Terrorism Act that there were several other agreements which were in effect for some time and stated that they are all attempts to make the country a colony.

The Thero continued to say that the ACSA agreement, the SOFA agreement and the Millenium Challenge Corporation are all such examples. He continued to say that when the US ambassador had met with the Chief Prelate of the Asgiriya Chapter that she was asked about these US agreements to which she had replied that it is still being drafted. He also said that if such agreements were formed with the countries that they must first seek a peoples referendum because the politicians although appointed as public representatives could easily be influenced with money. He further added that on their end they will summon the main figures and discuss with them and ask whether or not they agree with the matter but stated that now the decision lies with the public and their vote.

Also speaking on the matter Venerable Professor Iduragare Dhammaratne Thero stated that the John C. Stennis ship is already docked at the Trincomalee harbour which could accommodate 6000 Navy personnel and 100 aircraft.

He continued to say that when the parliamentary debates were still ongoing that the Prime Minister had made a visit to the ship. The Thero claimed that their plan is to give America 2.1 million acres of land connecting the Colombo Port to the Trinco harbour which has a width of 6 miles. He further said that they brought the land act to facilitate this plan and now the act has already been approved. Commenting on the act, he said that through it that both private and state-owned lands can be taken over instantly and that a price of an acre stands at Rs. 24 but ironically a price of a bun is Rs. 25.

Venerable Professor Iduragare Dhammaratna Thero spoke on a recent remark made by the Prime Minister on him, commenting that they are from a Niganta Shasanaya. He questioned the audacity of the Prime Minister to make such a remark and mentioned the need to come out and be straightforward. 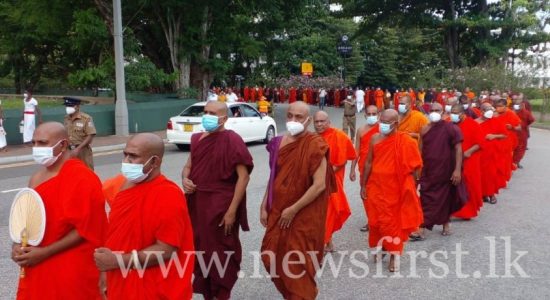