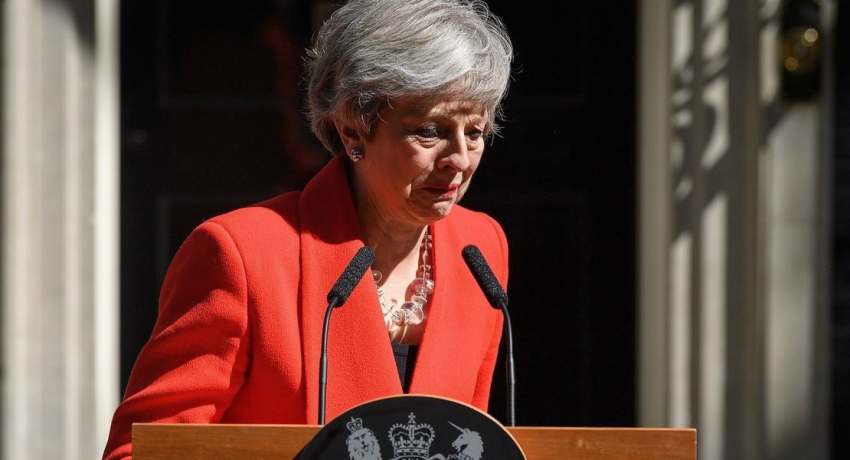 Colombo (News 1st): Theresa May announced her resignation as the UK Prime Minister, today (May 24). She said she will quit as leader of the Conservative Party on June 7th this year.

Theresa May steps down amid intensifying pressure from backbench Conservative members of parliament. May’s Brexit withdrawal deal was rejected by the UK parliament three times consecutively.

In an emotional statement outside her office in Downing Street, London, Theresa May announced she was stepping down as prime minister.

“I believe it was right to persevere even when the odds against success seemed high. But it is now clear to me that it is in the best interests of the country for a new prime minister to lead that effort. So I am today announcing that I will resign as leader of the Conservative and Unionist Party on Friday the 7th of June so that a successor can be chosen.”

Speaking regarding May’s resignation Professor Charitha Herath noted that the mandate of the people changes from time to time and when the mandate changes the leaders of the society step down, this is the system. When the local government election concluded in February 2018 he noted that they must think as if the mandate given on the 8th of January 2015 ended.

Herath added that in 1975 when Mrs Sirimavo Bandaranaike decided to extend the term of the government till 1977, J.R. Jayawardena resigned from Colombo North and went for a by-election and he won a landslide victory in the by-election.

He said after he won he came out and said that the government of Bandaranaike had died and that it is buried in two years it will begin to give out a bad odour. He noted that if a person who dies today is buried in two years we will have to face more problems and similarly they thought that after the local government elections in February 2018 the government will rethink on their public mandate. However, Herath said they did not seek a public mandate, they postponed the elections that were already due.

General Secretary of the Sri Lanka Communist Party D.E.W. Gunasekara speaking regarding this said according to democracy or the Westminister system, there is a tradition of bowing down to the public views and stepping down from their positions.

He noted that Sri Lanka does not have a Westminister system nor an executive system after the 19th amendment and since August 2015 Sri Lanka has been stuck between the two, therefore, the country has not been able to use the productive features of parliamentary democracy and on the other hand have lost the productive features of the executive presidency, and are facing a massive crisis.

Gunasekara said in 2015 Ranil Wickremesinghe became prime minister with a minority and without a majority in parliament, which is a first in Sri Lankan history, many people who speak about the constitution are covering this up and are not highlighting it enough.

D.E.W. Gunasekara said when considered the situation today, the prime minister only has a simple majority and a few extra seats.