The first quarter final match of the cricket World Cup 2015 got underway earlier at the Sydney Cricket Ground early Wednesday. Sri Lanka clashed head on with South Africa on the knockout stage.

Sri Lanka won the toss and elected to bat first, getting off to a very slow start after losing the wickets of both openers, Kusal Perera and TM Dilshan early on in the innings.

Kumar Sangakkara and Lahiru Thirimanna put up a 65 run partnership before Thirimanna was dismissed for 41 runs by Imran Tahir as Sangakkara soldired on slowly.

Mahela Jayawardene was the next victim of Tahir, presenting a simple catch to Du Plessis at short midwicket. Skipper Angelo Mathews posted a slow 19 runs before being dismissed by JP Dumini on his last ball of the over and the next few wickets fell at a stretch, giving Dumini a hat-trick as he bagged the next two wickets on the first two balls of his next over.

Sangakkara, who slowly soldiered on with just three boundaries to get 45 runs off 96 balls was dismissed as the 8th wicket as he found deep third man, going for a well struck cut, but failing to find the gap.

As though to salute in acknowledgement of the magnificent part the Sri Lankan veteran has played during his fantastic international career, the heavens opened up just as Sangakkara began to walk off his crease following the dismissal.

Following a short pause caused by rain, the match resumed with Malinga coming in to accompany Dushmantha Chameera. Malinga and Chameera could only get 6 as a pair as Malinga was caught at cover, giving Tahir his fourth wicket. Sri Lanka was all out fr 133 runs in just 37.2 overs.

For the Proteas, Pacers Dale Steyn, Kyle Abbott and Morne Morkel claimed a wicket each as the spinner duo JP Duminy and Tahir ran through the Lankan batting line-up to bag the rest. Dumini claimed three wickets for his hat-trick as Tahir claimed 4.

South Africa began their reply to Sri Lanka’s 133 a short while ago. Stay tuned with the Newsfirst.lk Facebook page and Twitter page for updates on every two overs. 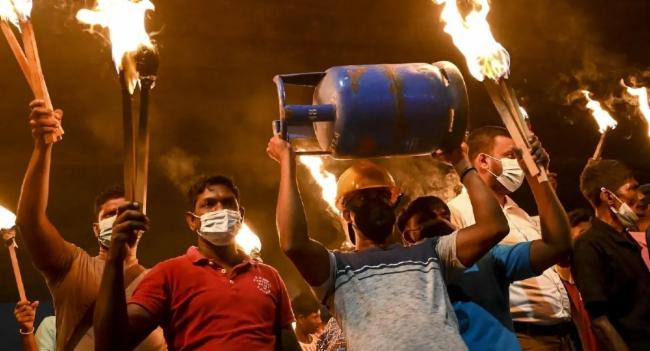