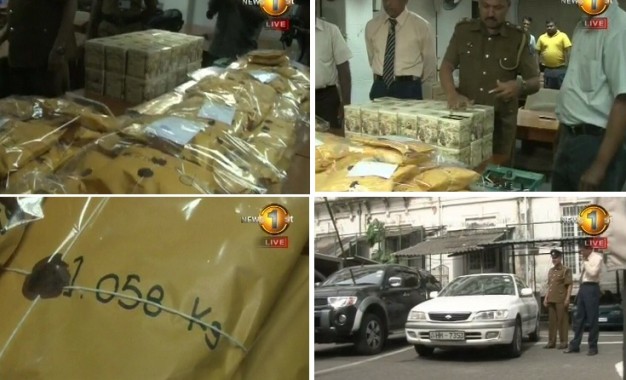 The police says that a middleman responsible for the smuggling of drugs into the country has been identified.

The police media spokesperson made this revelation while making clarifications regarding a haul of 59 kilogrammes of narcotics, valued at Rs. 450 million, that was seized by the police in Katugastota.

The haul of narcotics was seized by the Police Anti-Narcotics Bureau in Katugastota. Four suspects have been arrested in connection with the incident. An individual from Palapathwala in Matale was arrested following investigations carried out on a tip off received in March 2013. The police also seized two rental vehicles that were used by the smugglers.

[quote]The arrested individual is 34 years old. He was arrested and taken to Katugastota at about 5 o’clock this morning. He used a key in his possessions to open the premises there. Fifty-seven parcels containing a certain substance were discovered at this location. During the operation, another person was arrested at Park Road in Mount Lavinia. He was arrested along with his wife. Another suspect connected to this narcotics racket was arrested at about 3 a.m. today in Kekirawa.[/quote]

SSP Rohana added that the police have been able to completely dismantle the smuggling racket that brings narcotics to Sri Lanka from abroad.

[quote]We have been able to dismantle this narcotics network completely. We had identified two of the key persons involved in smuggling narcotics into Sri Lanka — one of them is Wele Sudha and the other was Mohammed Siddique. The seizure of the haul of 59 kilogrammes of Heroin today, has revealed that there is a third party that is involved in bringing narcotics into Sri Lanka. The investigation is ongoing.[/quote]