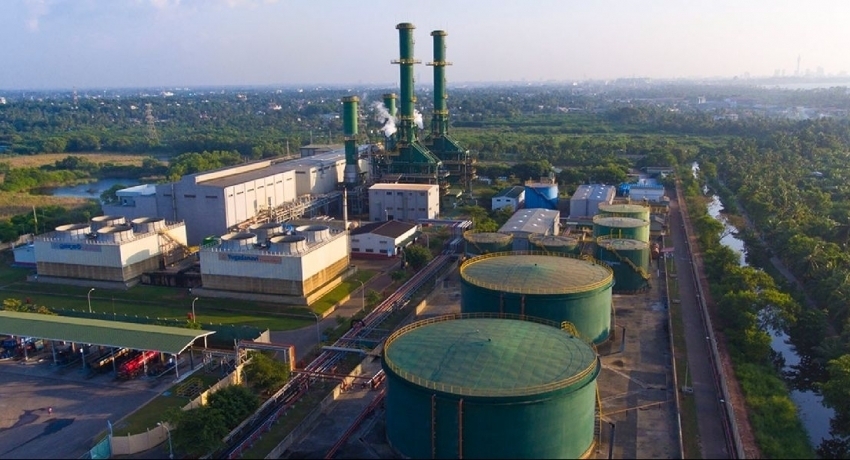 COLOMBO (News 1st); 11 constituent parties of the Sri Lankan government have strongly criticized the attempts being made by the state to sign an agreement with US-based New Fortress Energy Inc, for Sri Lanka’s LNG requirement.

Minister Vasudeva Nanayakkara on Tuesday (14) said though they are in the government, certain actions taken by the government violate the pledges they made to the people.

“On the other hand, we are disgusted with the corrupt conduct of the government, while we also witness the fall of living standards of the people,” said the Minister.

Professor Tissa Vitharana, one of the pioneering leftist leaders in the country lamented that though they worked to bring the President and the Government to power and are on the same side, their views are being disregarded.

“We will continue to struggle to direct the government on to the correct path. This is not easy when they do not listen to us,” he said.

Minister Wimal Weerawansa one of the most vocal figures in the government, said there are some who attempt to portray the efforts of the 11 constituent parties as a political charade.

“We will reverse all these agreements as they harm the country”, threatened Opposition Leader Sajith Premadasa, speaking in parliament last week on the controversial ‘New Fortress Energy’ LNG deal.

His remarks came after JVP Leader Anura Kumara Dissanayake made an explosive revelation noting that the agreement for the LNG Plant in Kerawalapitiya was NOT signed with New Fortress Energy, but with a separate company.

Tabling the agreement, he revealed that the government has in fact signed it with NFE Sri Lanka Power Holding LLC., and NOT New Fortress Energy Inc.

On the 21st of September 2021, New Fortress Energy Inc. (NASDAQ: NFE) (“New Fortress”) in a press release announded that it executed a definitive agreement for New Fortress’ investment in West Coast Power Limited (“WCP”), the owner of the 310 MW Yugadanavi Power Plant based in Colombo, along with the rights to develop a new LNG Terminal off the coast of Colombo, the capital city.

However, concerns are now mounting over this agreement, which was also dubbed as the midnight deal, by the JVP or People’s Liberation Front.

Anura Kumara Dissanayake claimed that the Government of Sri Lanka had signed an agreement with US-based energy company New Fortress Energy Inc. past midnight on September 17th, transferring the Treasury’s 40% stake in the Yugadanavi Power Station in Kerawalapitiya to the company.

“An agreement of national importance was signed at 12:06 past midnight. After that the foreigner who came for the signing went back to America on a flight at 2.00 a.m.,” he claimed at a media briefing held on 19th September.

Strong Opposition against the Deal:

The Opposition parties and several Trade Unions affiliated with the Ceylon Electricity Board (CEB) are, however, up in arms against the move, raising fears of a foreign monopoly in the country’s energy sector and the alienation of the country’s assets to a foreign party in an arbitrary manner.

Opposition Leader and Samagi Jana Balawegaya (SJB) Leader Sajith Premadasa, issuing a media statement, criticized the plans to hand over 40 percent stake of the Yugadanavi Plant to a foreign company, dubbing it as a “midnight betrayal.

He recently, stressed that under a Premadasa Government all these agreements will be reversed as they are harmful to the country, also noting that though these agreements the government of Sri Lanka is toying with National Security.

Opposition from within the Government:

A number of coalition partners of the Government have also been vocal against the proposal, adding pressure to the Government. A Group of 10 Parties, teamed up as ‘G10’, led by Ministers Wimal Weerawansa, Udaya Gammanpila and Vasudeva Nanayakkara has been agitating within the Government demanding to revisit the proposal.

These Parties, which usually identify themselves with a nationalist line of thought and anti-imperialist views, are seen to be not comfortable with the idea of handing over a 40 percent stake of a centre piece of the Sri Lankan baseload power capacity to a US firm along with gas supply rights to the country’s power plants.

The Sri Lanka Freedom Party (SLFP) led by former President Maithripala Sirisena has also thrown its weight behind this group.

Legal Action against the Deal:

It must be noted that apart from the Janatha Vimukthi Peramuna, United National Party, Samagi Jana Balavegaya and social activits, Sri Lanka’s Catholic Church His Eminence Malcolm Cardinal Ranjith, and Venerable Elle Gunawansa Thero filed a Fundamental Rights Application with the Supreme Court seeking an order to prevent the transfers of shares of the Yugadanavi Power Plant to New Fortress Inc.

Prime Minister Mahinda Rajapaksa and the Cabinet of Ministers, the Ceylon Electricity Board, West Coast Power (Pvt) Ltd, Lakdhanavi Limited, The Monetary Board of the Central Bank of Sri Lanka, The Ceylon Petroleum Corporation were named as respondents among 43 others.

Cabinet ministers Vasudeva Nanayakkara, Wimal Weerawansa and Udaya Gammanpila have made representations to the Supreme Court in support of the fundamental rights cases filed against the transfer of 40 per cent of government shares of the Yugadanavi Power Station to US-based New Fortress Energy.

They threw their weight behind the petitions, although they have been named respondents as members of the Cabinet.