COLOMBO (News 1st); Sri Lanka made it two wins out of two in Round 1 of the ICC Men’s T20 World Cup with a thorough all-round performance against Ireland. 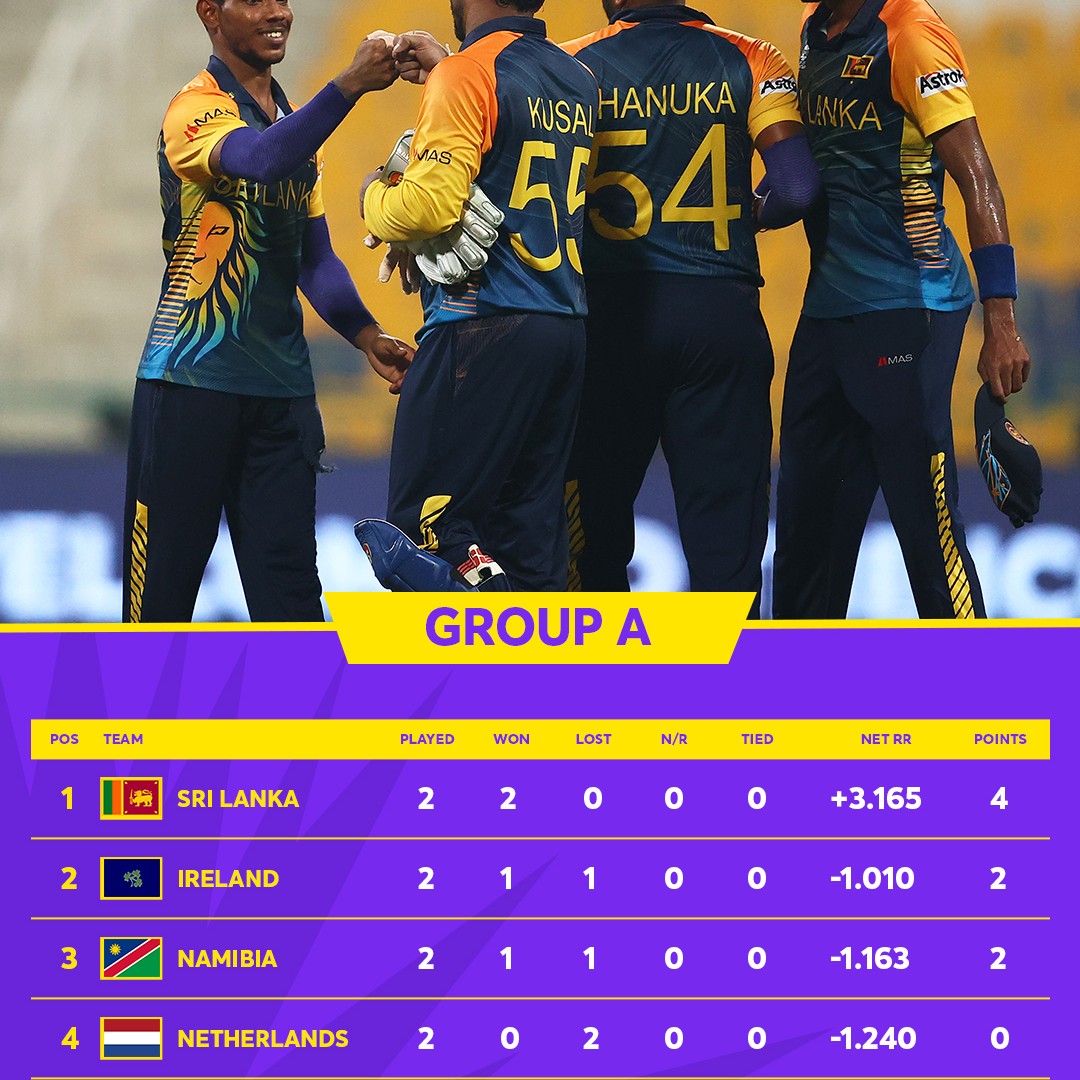 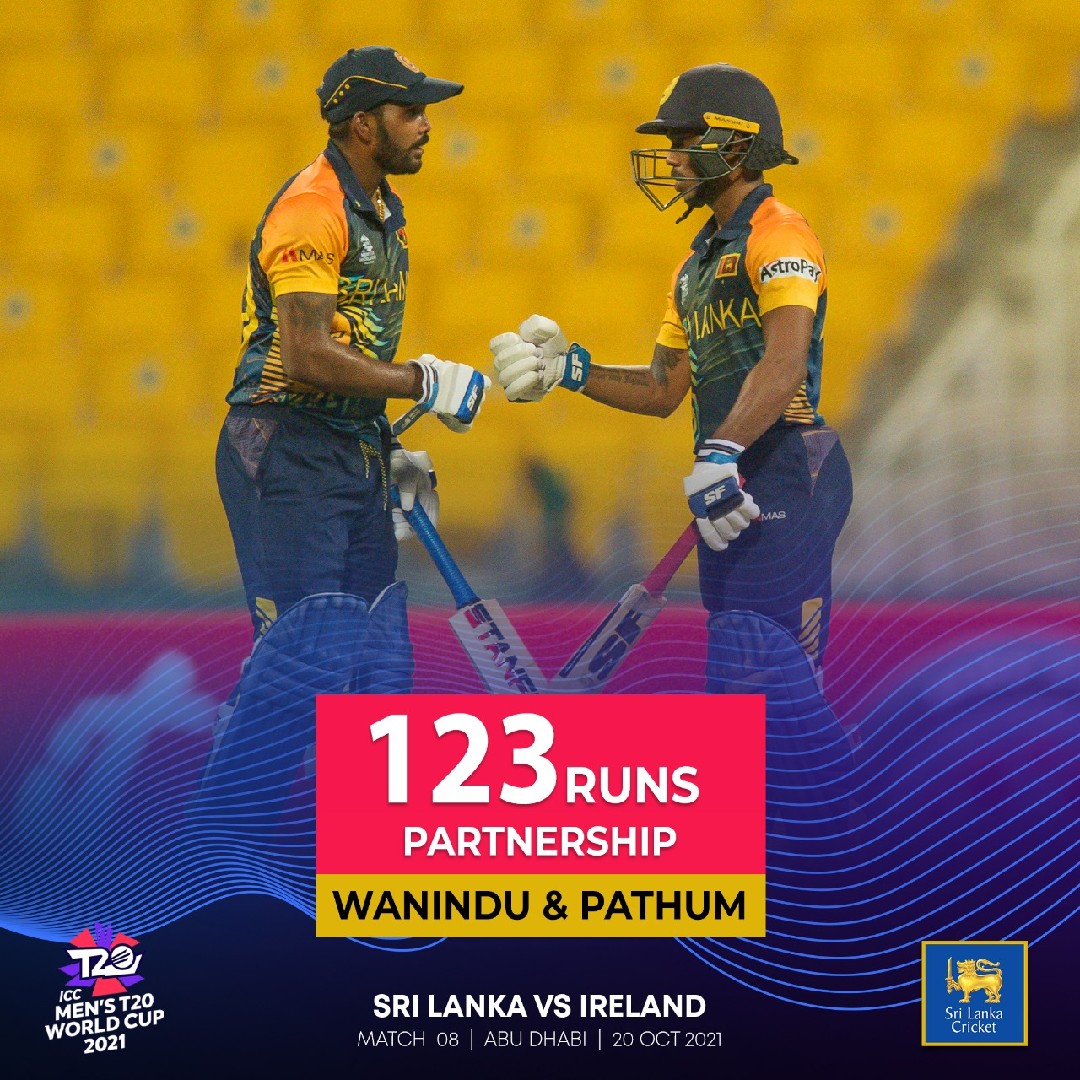 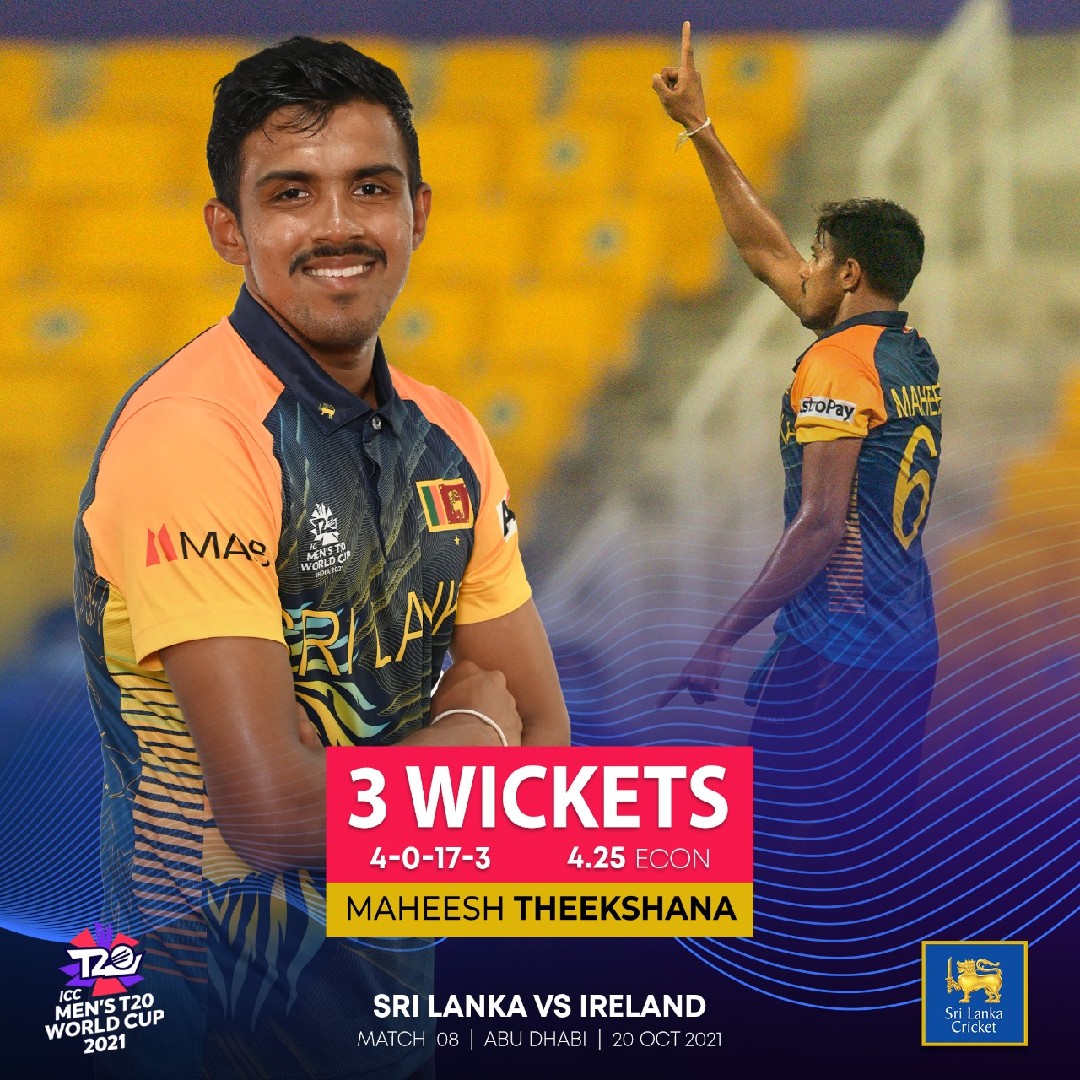 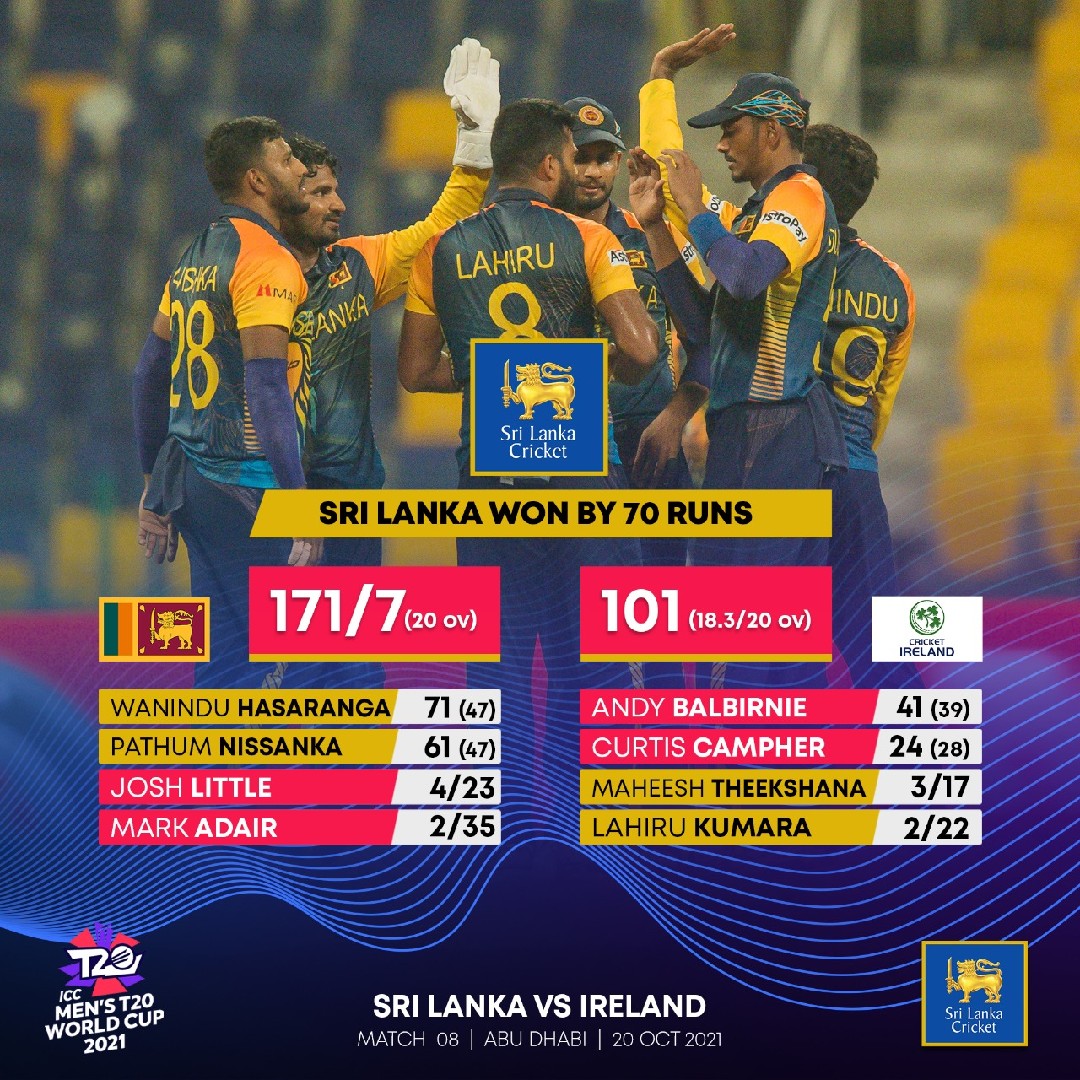 It wasn’t all smooth sailing, though, as they found themselves at 8/3 batting first before Pathum Nissanka and Wanindu Hasaranga revived the innings with fantastic half-centuries.

Ireland, on the other hand, were dealt their first loss of the tournament but don’t have much time to ponder as they face Namibia on 22 October in the hopes of qualifying for the Super 12.

Chasing 172 for the win, Ireland, faltered early in their innings and never managed to recover.

Apart from the 53-run partnership between Andy Balbirnie and Curtis Campher, the batting order failed to live up to its billing as they crumbled under the pressure of the asking rate.

After crushing the top-order, Sri Lanka continued to turn the screws, putting further pressure on Campher and Balbirnie with the required run rate climbing over 10 at the halfway stage. Campher tried to hit his way out of his slow innings but had his stumps disturbed by Theekshana.

The wicket opened the floodgates for Ireland, who lost four wickets in the next three overs. Lahiru Kumara accounted for two of those wickets, including that of skipper Balbirnie whose resistance finally came to an end in the 16th over. Theekshana scalped one more wicket to make it his second three-for in as many games.

Ireland did manage to take their score past the 100-run mark but succumbed to their first defeat of the tournament as they went from 85/3 to 101 all out. Sri Lanka bagged the two points but more importantly, received a massive boost to their net run rate with a huge margin of victory.

After the Sri Lankan batters rescued the team from 8/3, it was the turn of the bowlers to put their hands up. Ireland’s opening stand lasted all of six balls as Kevin O’Brien once again failed to get his team off to start. Chamika Karunaratne struck in the final ball of his over after O’Brien top-edged the short ball to Theekshana at short fine.

Fellow opener Paul Stirling couldn’t make much of the lifeline in the first over after being dropped by Bhanuka Rajapaksa. After hitting Theekshana for a four in the previous ball, Stirling’s sweep went straight to Lahiru Kumara at short fine, who jumbled the ball before completing the catch.

After having done the damage with the ball, Hasaranga was thrown the ball in the fourth over and made an instant impact, outfoxing the hard-hitting Gareth Delany with a googly that stayed low.

The hat-trick hero from the previous game, Curtis Campher, smashed two fours in the last over of the Powerplay to make the scorecard look a little better for Ireland. Skipper Andy Balbirnie and Campher ensured that Ireland went into the drinks break with no further losses, though it came at the cost of the required rate climbing over 10.

Earlier in the day, Sri Lanka got off to a dreadful start after being put in to bat first as Ireland ripped through the top order.

In just the second ball of the match, Gareth Delany took a brilliant low catch just inches off the ground to send Kusal Perera packing. It was Paul Stirling’s golden arm that did the magic, getting rid of the dangerous Perera for a golden duck.

At the other end, Josh Little made the new ball talk, getting it to move back into the right-hander to cause off sorts of trouble. He first cramped Dinesh Chandimal for room, forcing him to cut a delivery that was too close to the body, only to chop on.

Little was on a hat-trick after he dismissed Avishka Fernando with a peach of a ball that nipped back just enough to hit the top of off stump, a dream delivery for any left-arm pacer.

Wanindu Hasaranga was pushed up the order to accelerate the scoring in the Powerplay and the move worked wonders. The last two overs of the fielding restrictions fetched Sri Lanka 30 runs, with Hasaranga smacking Simi Singh for four consecutive boundaries off the last four balls.

Nissanka and Hasaranga kept the scoreboard ticking, bringing up their 50-run partnership in just 37 balls.

Ireland finally got some respite thanks to Mark Adair. Throwing his bat at everything cost Hasaranga, as an attempted slice went straight to Craig Young at short third.

Ireland pulled it back in the death with regular wickets. Little returned for the final two overs of his spell and picked up a wicket each in the two overs, including that of Nissanka, to finish with 4/23.

A flurry in the end from Shanaka, who scored an unbeaten 21 off just 11, set a target of 172 for Ireland to chase down.