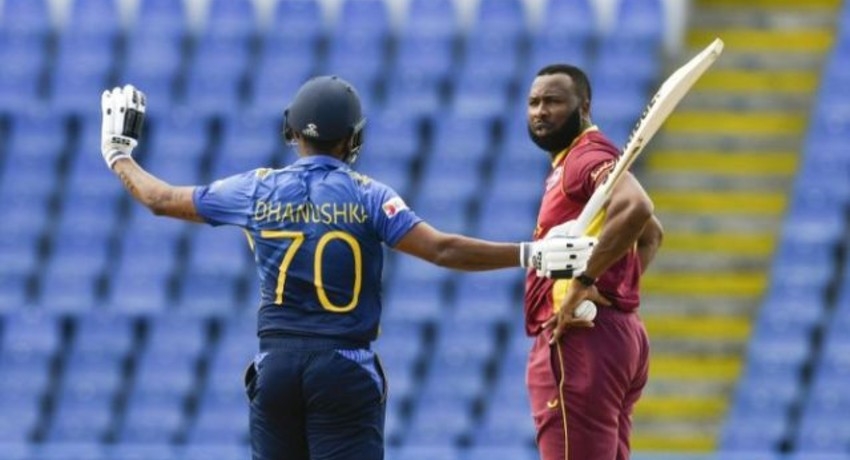 West Indies after two close wins in the T20I series, started the one-day series in a comprehensive manner as they beat the Sri Lankan side by eight wickets in the first game of the three-match series. However, the talking point of the whole game became a bizarre controversial decision by the third umpire.

After a commanding start, Sri Lanka were in a fantastic position at 105 for no loss as skipper Dimuth Karunaratne and Danushka Gunathilaka had given their side a good start. But as soon as the partnership was broken by West Indies skipper Kieron Pollard with a fantastic grab on his follow-through.

But, what followed became the centre of everyone’s attention.

The MCC, guardians of the Laws of cricket, said:

"The key part of the obstructing the field Law (37.2/37.3) is intent – which can be hard to judge. If the obstruction is wilful, it will be out, but if it's accidental then it will be not out."

In the 22nd over of the innings, a shorter delivery from Pollard, Gunathilaka defended it to the ground, he came forward a few steps, asking his partner not to run as Pollard came charging back in seeing the batsman out of the crease to affect a run-out, only to witness Gunathilaka run backward to save himself from the same not realising the ball was in between his feet.

Pollard, visibly frustrated shouted ‘howzat’ and the TV umpire deemed that Gunathilaka ‘wilfully’ obstructed the field and seemed to kick the ball in order to defend himself from the run-out.

The Marylebone Cricket Club, guardians of the Laws of cricket, said, “The key part of the obstructing the field Law (37.2/37.3) is intent – which can be hard to judge. If the obstruction is wilful, it will be out, but if it’s accidental then it will be not out.”

The words wilful and accidental became the main focus as many former cricketers including Sri Lanka’s newly appointed Director of Cricket Tom Moody jumped in saying that there was everything but wilful obstruction of the field by the left-hander. Former West Indies skipper Daren Sammy said that he wouldn’t even have appealed had he been involved.

The fans on Twitter too had the same opinion as they suggested that Gunathilaka only wanted to get back into his crease as soon as possible. However, some of the users opined that Pollard was in his right to appeal and there was untoward from the burly all-rounder and said that there was an error from the TV umpire as well.

Don’t think that was willful at all. I wouldn’t appeal but hey 🤷🏿‍♂️🤷🏿‍♂️