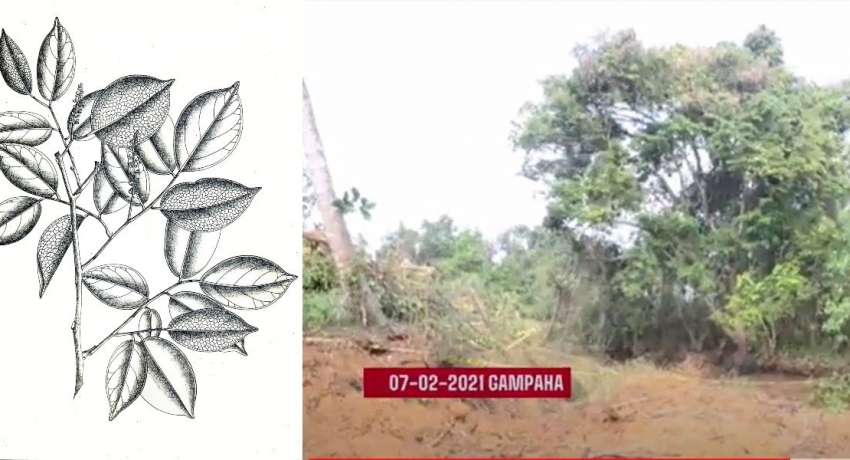 Colombo (News 1st); Environmentalists have strongly opposed to any move to relocate the only surviving tree of the Sri Lankan Legume or Crudia zeylanica was saved in the nick of time on Sunday (07).

There are serious concerns as to whether Sri Lanka in fact has the technlogy required to relocate such an important and rare tree, questioned environmentalist Nayanaka Ranwella.

The company tasked with relocating the tree is one which was accused of illegally taking over lands owned by the Department of Wildlife Conservation, he alleged.

On Monday (08) several personnel from the company engaged in the construction of the expressway from Kadawatha to Meerigama visited the location in question, however did not respond to questioned posed to them.

‘We are no (not) cutting the tree,” said a Chinese national who was among them.

The plant did not have a photograph of it till it was rediscovered; even Sri Lanka’s National Herbarium only had a sketch.
.
The only surviving tree of the Sri Lankan Legume or Crudia zeylanica was rediscovered in a small plot of forest land located close to the Daraluwa Railway Station in Gampaha

Conservation Biologist and Plant Taxonomist Himesh Dilruwan Jayasinghe was the first to discover that Crudia zeylanica is a plant that grows in Sri Lanka’s wet-zone.

This his species is deemed a protected species under the provisions of the Fauna and Flora Protection Ordinance, said environmentalist Jagath Gunawardena adding it is prohibited to destroy or cause harm to this tree.

“If I did not turn up, the tree would be no more,” she said, adding the entire eco-system in the area was destroyed by those who do not understand the importance of the environment.

“We cannot recreate such an ecosystem,” she warned.

A proposal to construct a playground in the Kadolkele mangrove of the Negombo lagoon had been withdrawn following the strong stand taken by the Gampaha District Forest Officer Devani Jayathilaka, last year.