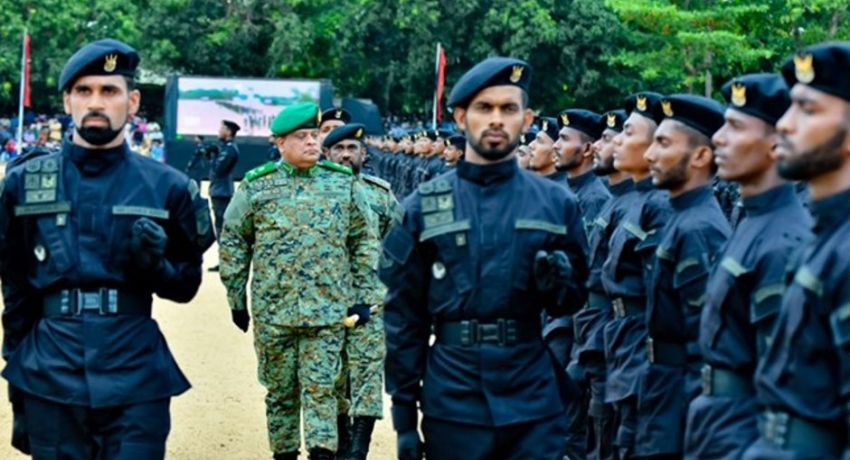 Colombo (News 1st); The state-of-the-art Special Forces Training School (SFTS) at Maduruoya adorned ceremonial garbs on Saturday (12) and inducted well-trained five more Officers and 295 Other Ranks of the elite Special Forces (SF) who followed the intensive nine-month-long Training Course No-50, in the presence of Lieutenant General Shavendra Silva, Commander of the Army and Colonel of the Regiment of Special Forces.

Heroic members of the Special Forces (SF) as one of the most elite and widely-admired units of the Army, have been rendering an invaluable service to the Nation since its founding and their exceptional tactful sacrifices during the final few years of the fight against LTTE terrorism, particularly with its Long Range Reconnaissance Patrol troops who have been recognized and famed as the most-feared, said the Sri Lanka Army.

Adding a new dimension to the proceedings, the badges to be awarded to those soldiers during the ceremony were flown by air.

The Commander of the Army afterward awarded Special Forces badges and the Colours to a representative group of those passing out undergraduates.

In a very rare gesture of excellence, Lieutenant T.M.T.G.N.M Tennakoon succeeded in becoming the Best Student and the Best Gymnast in the Course while Lance Corporal A.G Aluthgedara was selected as the Best Shooter.

Both received appreciation and trophies for proficiency from the Army Chief amid roars of applause as their names were readout.

In reply to a query about the Easter Sunday attack, he said that on the directions of the President, all necessary investigations are still underway and all security measures are in place for the security of the people in the country.

The Army will accordingly join hands with others for that purpose.

The Army with Police would take every possible measure to eradicate narcotics and drugs from the Sri Lankan soil as early as possible and the Army will give its maximum support for those operations.