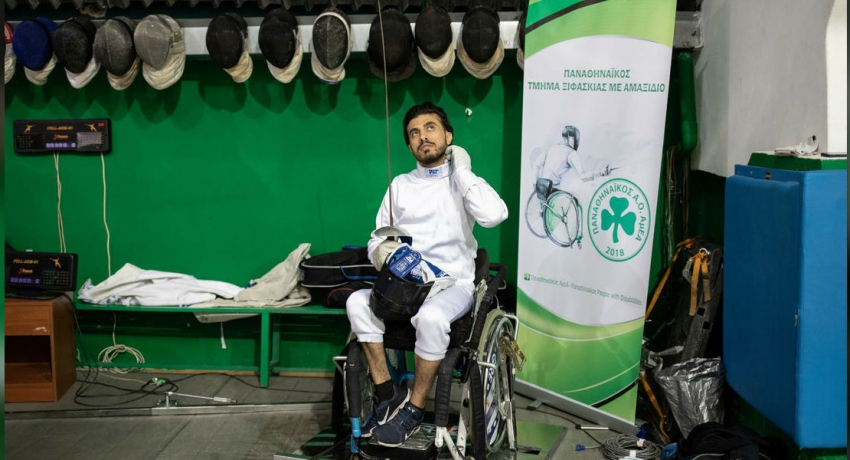 Reuters-A 29-year-old Iraqi refugee in Greece has made it his dream to reach the Tokyo Paralympics as a wheelchair fencer.

It took Iraqi refugee Wisam Sami five attempts to finally succeed in reaching Greece with thousands of others fleeing war in his homeland.

Four years after a journey that took him from war-torn Mosul to Athens via Turkey, Sami says he hopes to clinch a spot to compete in fencing at Tokyo 2020.

Sami, who was left with a permanent limp in his right leg after a medical mistake at an Iraqi hospital when he was three, has spent the past two years training to be a wheelchair fencer.

“When I play this I feel I can do everything,” he told Reuters.

He has competed internationally this year and is now hopeful he could be selected. The Paralympics, as well as the Olympics, have had a refugees team since the Rio Games in 2016.

Sami, who worked as a photographic designer in Mosul, spent six months living in a tent in a refugee camp on the island of Samos before moving to the mainland with support from the U.N. refugee agency UNHCR. He said the time in the camp was a difficult one.

A project by Greece’s Paralympics Committee for refugees caught Sami’s eye in 2017 and since then he has been developing his sabre skills at a gym.

Sami’s coach Leonidas Koukos, who is also an aide to the head coach of the Greek Paralympic team, said that as a player, Sami was quick and determined.

“My biggest ambition for him is to be happy…if he achieves that through fencing, I will be very happy to have helped him,” said Koukos.