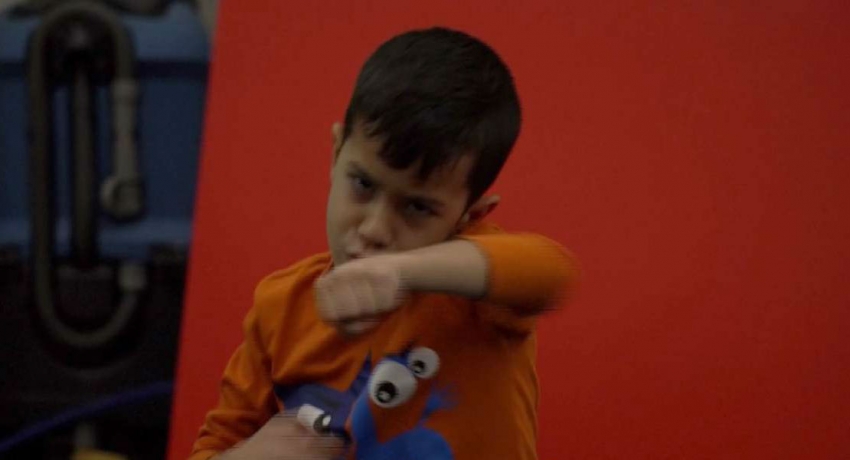 Reuters – In a neglected Naples neighbourhood, a church has been transformed into a boxing ring, where youths such as 21-year-old Nico Rodrigues escape the troubled local area to learn the sport, its rules and a different way of life.

While Rodrigues practises his jabs and uppercuts on a hanging punchbag inside the 17th century church, outside its doors young people in hoodies argue and throw punches at each other as police sirens blare – a familiar street scene in the poor Rione Sanita district.

Rodrigues grew up in the neighbourhood, north of Naples’ historic centre, where poverty and high levels of crime mean young people have very few opportunities.

Of Italy’s three main mafias, including Sicily’s Cosa Nostra and Calabria’s ‘Ndrangheta, the Naples, Campania area is home to the Camorra which encourages youth into its grip by being one of the area’s biggest employers. Youth unemployment in Campania in 2018 between 15-24-year-olds was 39.7 percent, according to the statistics office Elabroazione Osservatorio Statistico.

Rodrigues is an Italian citizen, and his mother moved from Cape Verde to Italy 28 years ago. He has not seen his father since he was a child, and was raised with his sister by his mother, who obtained Italian nationality since moving.

For Rodrigues, and the other 59 young people who join the boxing session three times a week at the Santa Maria della Sanita church, letting out their frustrations on punch bags and being saved by the bell is a welcome escape from the realities of living in Rione Sanita.

“I practised different sports but boxing is the only one that makes me feel good both physically and mentally and that allows me to express my emotions, whether it’s anger or happiness,” Rodrigues told Reuters during a Wednesday night boxing lesson.

The sound of the aspiring heavyweights practising their prances echoes in the church hall, which was built between 1602-1611 and is famous for its bright yellow dome that can be spotted miles away.

Looked on by religious artefacts, the class of 8-22 year-olds is taught by two policemen, a relationship which has helped calm hostile tension between police and youth on the streets.

They are taught the strict rules of the sport – how to focus, follow rules, not lose a bout – all lessons they take with them into everyday life.

“With boxing you can express anger or freedom. You don’t think about anything, you are only focused on training and you have fun because you are among friends. We make jokes, we have fun. Boxing combines everything,” Rodrigues said.

A regular in the church-turned-gym is local resident Davide Marotta. After seeing many friends end up in jail, he now focuses his time on helping youngsters fall through the ropes instead of behind bars.

“Unfortunately, when I was a teenager, we did not have these places. If at that time such initiatives had been promoted, perhaps some of my friends would have followed a different path,” Marotta said.

In another church some 200m away, there is no sound of thwacks and thumps, but instead the calming tones of a French horn.

Rodrigues’ fighting spirit turns to music, as he recites a favourite song – The Gladiator soundtrack’s “Honor Him” – on his brass instrument.

He has played the French horn for 10 years, and has been studying at a specialist music institute in central Naples where he hopes to become good enough to join an orchestra after graduating.

Gaining confidence in the boxing ring has helped him to follow his dreams of becoming a professional musician.

Father Antonio Loffredo has been in charge of the church since 2001, and began the boxing project around a year ago. He has initiated a wide range of activities for young people of the neighbourhood.

“Educating young people to resistance, to resilience, in a neighbourhood where often there is no future is really difficult”, he said after leading a Mass for a small congregation.

“We think that slowly – of course we cannot save them with these experiments – these experiences are like a little laboratory, like small seeds, it is clear the problem needs to be solved by those who really have the responsibility.”

Loffredo believed that if an area as troubled as Rione Sanita could give youths hope for a brighter future, anywhere could.