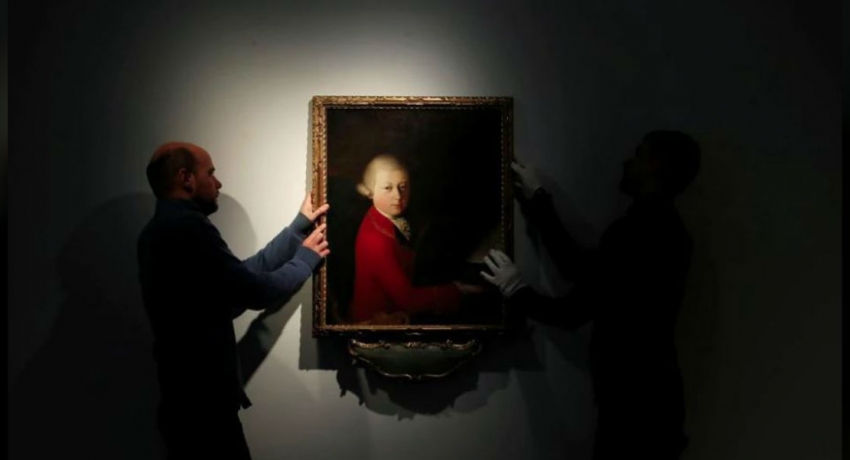 Portrait of young Mozart could fetch up to €1.2mn in Paris auction

Portrait of young Mozart could fetch up to €1.2mn in Paris auction

Reuters – A rare portrait of Austrian classical composer Wolfgang Amadeus Mozart will be sold by British auction house Christie’s on November 27 in Paris at an estimated price of between 800,000 and 1.2 million euros (881,600 and 1.32 million dollars).

The artwork, one of the four paintings painted during the composer’s lifetime and still part of a private collection, was painted in 1770 and attributed to Italian painter Giambettino Cignaroli.

“We know exactly when it was painted, it’s back to January 1770, and Mozart is aged 13… It was painted for Pietro Lugiati, who saw Mozart playing music and who just decided he was an amazing and talented musician and he ordered the portrait”, the head of the Old Master’s department at Christie’s Paris, Astrid Centner d’Oultremont, told Reuters.

The oil on canvas portrait depicts the 13-year-old Mozart playing at his harpsichord in front of a score and wearing a white wig and a red frock coat.

“What’s very interesting about that portrait is the musical score – it’s actually only known from that portrait, so some musicologists have said it could be the work of Mozart himself,” Centner d’Oultremont said.

The portrait was ordered by Venetian receiver general Lugiati some days after an organ concert Mozart gave in Verona in January 1770.