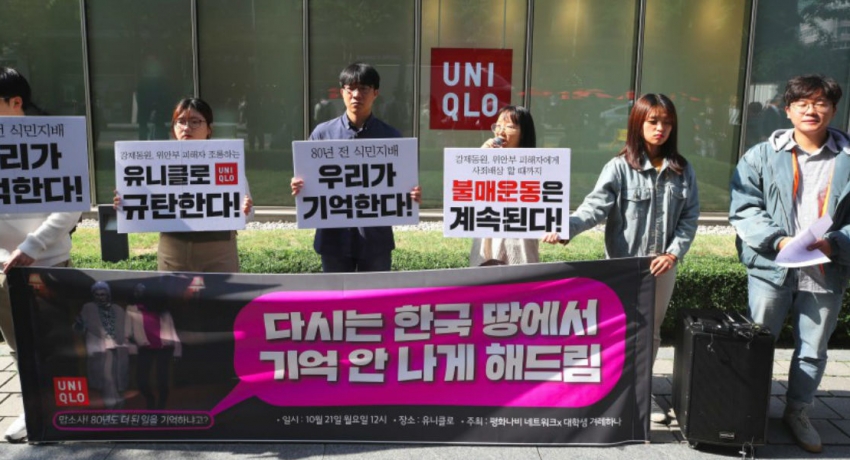 The 19-second parody video posted on Saturday (October 19) depicts a likeness of the Uniqlo’s TV commercial that the company began airing this month in South Korea and other markets.

In the original Uniqlo commercial, Iris Apfel, a 97-year-old American style icon with more than 1.4 million Instagram followers, was in an animated conversation with 12-year-old fashion designer Kheris Rogers. When Rogers asked how she used to dress as a teenager, Apfel said: “I can’t remember that far back!”

Instead of a literal translation of that line, the commercial which aired in South Korea carried subtitles saying: “Gosh! How can I remember something that goes back 80 years?”

Uniqlo pulled the ad in South Korea on Saturday (October 19) and a company official told Reuters there were no intentions to touch on the issue of comfort women or South Korea-Japan dispute.

In the parody video, Youn stands with Yang Geum-deok, a 90-year-old woman who had been a forced laborer for Japan’s Mitsubishi during World War Two. He asks how hard it was for Yang when she was young. “I can never forget that awfully painful memory,” she replies.

Another South Korean university student Bang Seulkichan staged a one-man protest in front of Uniqlo store in central Seoul and asked for the company’s official apology.

South Korea and Japan share a bitter history dating to the Japanese colonization of the Korean peninsula from 1910 to 1945, including the use of comfort women, a euphemism for girls and women, many of them Korean, forced to work in its wartime brothels.

Sri Lanka Projected to Grow by 3.3 Percent Amidst Uncertainties – WB