65 containers of mattresses from UK seized at the Customs; is it imported waste?

65 containers of mattresses from UK seized at the Customs; is it imported waste?

COLOMBO (News 1st): The Consumer Protection Unit of the Sri Lanka Customs seized 65 freight containers containing used mattresses imported from the UK. Customs Media Spokesperson Sunil Jayaratne stressed that there is serious concern over the material as it could be classified as waste adding that certain elements in the mattresses could pose a threat to the environment. He said several freight containers will be selected at random on Monday for inspection.

A private company in Sri Lanka had imported the mattresses from the UK. It is reported, that over 100 freight containers with similar mattresses were imported on an earlier occasion as well.

The global trash trade has reached a turning point; wealthier nations have long shipped their waste to the developing world to be processed, but in recent months, some nations in South East Asia have begun sending the exports, much of it contaminated plastic and trash that is un-recyclable back to where it came from.

The pushback comes as containers of trash continue to accumulate on the shores of countries like China, Malaysia, Thailand and the Philippines, which are increasingly worried that the environmental costs are greater than the income they bring in from importing the waste. However, in many cases, industrialized countries would rather ship the waste to developing nations instead of dealing with the cost and difficulties of proper waste disposal. The garbage is exported from around a dozen developed countries including the U.S., Canada, France, Belgium, Germany, Spain, the Netherlands and the U.K.

According to the BBC, the European Union is the world’s biggest exporter of waste, while the U.S. is the largest single-country source. Despite the various efforts made to curb the dumping of waste in countries unfortunately unequipped to handle them, the illegal practice continues.’

Ghana, Africa is one of the countries where e-waste from all over the world “go to die”.

Every day, the port city of Lagos in Nigeria receive an estimated 15 shipping containers filled with discarded electronics.

Bangladesh has a running history of being a dumping ground for everything from plastic waste and asbestos to defective steel, waste oil, lead waste and used batteries from different countries.

Experts continuously warned of the attempts to dispose of the waste of foreign nations in Sri Lanka through the Singapore – Sri Lanka Free Trade Agreement. Sri Lanka is yet to make a strong stand against the dumping of foreign waste as in China, Malaysia, Thailand and Phillippines.

Massive garbage mounds are seen in areas like Kandy, Matara and Karadiyana, where excessive amounts of garbage are being disposed of without a proper disposal system. The clinical waste that washed up on the shores from Uduppu to Norochcholai in the Puttalam District was also a similar instance. 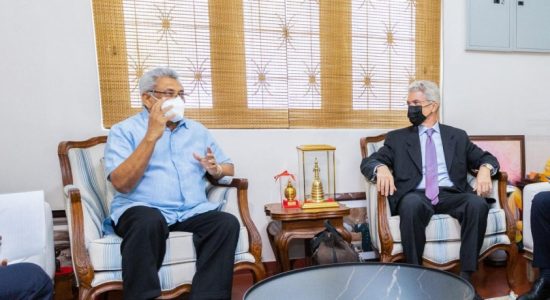