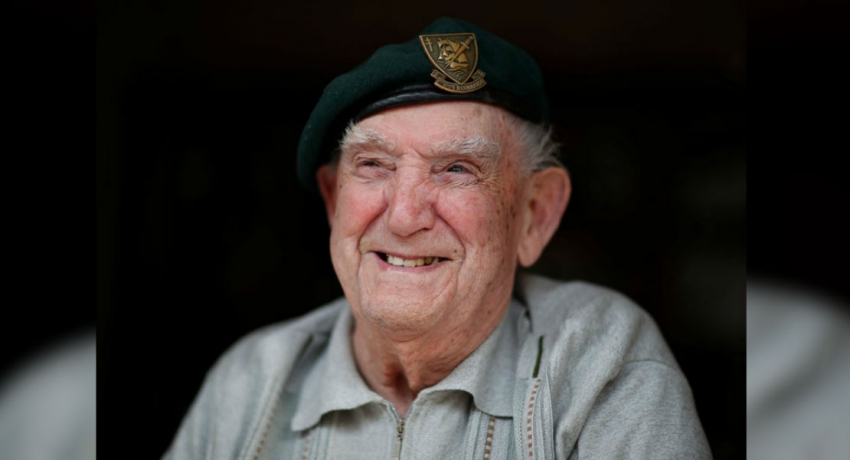 As D-Day landings fade from memory, a veteran grapples with violence of war

As D-Day landings fade from memory, a veteran grapples with violence of war

Reuters – Seventy-five years on, Leon Gautier still grapples with the memories of the brutality of war. He landed on Sword Beach in a hail of enemy fire on June 6, 1944, one of the first wave of French commandos to storm the Normandy beachfront defended by Hitler’s troops.

Today, 96-year-old Gautier, his wit quick and memory sharp, lives just a few hundred metres (yards) from a German bunker he and comrades among the special forces of French Captain Philippe Kieffer were tasked with securing before pushing inland.

Gautier was 17 when Hitler’s forces occupied France. Too young to join the army, he enrolled in the navy and was aboard one of the last French warships to sail for Britain to join the Free French Forces of General Charles de Gaulle as the Germans swept across the northern half of France in 1940.

Four years later, he was one of 177 elite French commandos who would take part in the Normandy landings.

On the night of June 5-6, Gautier slept as his landing craft pitched and rolled across the English Channel before holding off the French coast as allied bombers and warships rained bombs and shells on the German coastal defences.

The French troops were first to wade chest-deep onto the beach.

“After you,” Gautier recalled British Colonel Robert Dawson telling the French green berets, letting them lead in a symbolic gesture. He recalled him and his comrades being eager to disembark and their joy of landing in their own country to liberate it.

Carrying his Tommy gun, two loaded chargers strapped around his chest, Gautier ran up the beach as bullets fizzed overhead, knowing he would narrow the gunners’ sweep the closer to the concrete bunker he got.

For the former marine commando, commemorations in June marking the 75th anniversary since more than 150,000 allied troops invaded France to drive out Nazi Germany forces will be a time to reflect on fallen friends and foes alike.

Gautier will be among a dwindling number of British, American, Canadian and French veterans, the youngest among them now in their nineties, expected to mark the anniversary on Normandy’s windswept beaches and manicured war memorials.

World War Two-era Dakota troop carriers will fly over the Channel, hundreds of parachutists will re-enact the air-drops that launched the beach landings, and the Royal British Legion will ferry some 300 British veterans to France’s shores.

U.S. President Donald Trump is due to visit the American war cemetery in Coleville-sur-Mer, which overlooks Omaha Beach, where more than 2,400 U.S. troops were killed on D-Day.

On a breezy afternoon last week, the U.S. Stars and Stripes fluttered above the cemetery’s 9,380 marble crosses, while visitors pondered the passing of the landings from living memory into the world’s collective history.