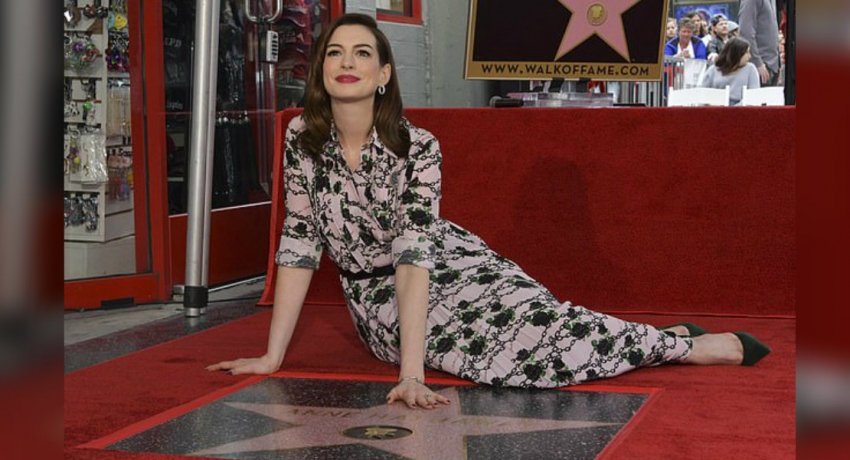 REUTERS: Oscar-winner Anne Hathaway on Thursday (May 9) paid tribute to her fans as the actress was honored with a star on the Hollywood Walk of Fame in Los Angeles. Hathaway, who won a best supporting actress Oscar in 1993 for “Les Miserables,” said she was “excited” to share the star with her fans and those who have supported her throughout her long career.

“It makes me so excited that this star can be a space for my incredible fans, my fans, who are the reason that this piece of land has been named for me, can pour their own vibrant, loving spirit. This is a spot that has meaning to me because of you,” said Hathaway, whose star ceremony came a day before the release of her latest movie, crime comedy “The Hustle.”

Director Dee Rees, who worked with Hathaway on Netflix’s upcoming “The Last Thing He Wanted,” turned out to support the star, along with actress and rapper Awkwafina, who co-starred with Hathaway in “Ocean’s 8.”

“Her big warm smile, her big warm hug and the genuine welcome in her voice when she said ‘hi. I’m Annie, call me Annie.’ And I was so stunned by her friendliness I think I still called her by her entire first and last name for the rest of the conversation, like ‘nice to meet you Anne Hathaway, could you please pass the ketchup Anne Hathaway,'” recalled Dee Rees of the first time she met Hathaway. Awkwafina also paid tribute to Hathaway, calling the actress a “sister.”

“I’ve called Annie a sister before because that is what she is. There are certain things about Annie, aside from her incredible accomplishments, there is a good person, a person that brings joy, a fighter, a listener and she fights selflessly for so many people,” said Awkwafina.

“I think when we talk about heroes and we talk about young girls coming into this industry looking for heroes, to have you honored, being honored today Annie, it’s an honor for me because I’ve idolized you my whole life and it’s an honor for all the young girls that you have taught to be better people so congratulations and you really deserve this,” she added. Hathaway first found fame in 2001 “The Princess Diaries,” playing a shy high school student who learns she is heir to the throne of a kingdom in Europe. She has also starred in films including “Brokeback Mountain,” “The Devil Wears Prada” and “The Dark Knight Rises.”