The US-backed resolution on Sri Lanka was tabled on Wednesday. The UN High Commissioner for Human Rights Zeid Ra’ad Al Hussein opened the session with a statement to the United Nations Human Rights Council.

Prince Zeid bin Ra’ad stated that the context in which this report is presented is very different to the one during which it was mandated.

He further stated that the election of the new president and a government on a platform centered on good governance, human rights and the rule of law, presents a historic opportunity to address the grave human rights violations that have wracked Sri Lanka – and to lay the basis for long term reconciliation and peace.

We are also seeing renewed engagement by the new government with the OHCHR and the UN Human rights mechanisms.

The previous government categorically rejected the Human Rights Council-mandated investigation, and refused access and co-operation. More worryingly it resorted to an unrelenting campaign of intimidation, and harassment against victims, witnesses and representatives of civil societies.

Permanent Representative to the United Nations, Ravinatha Aryasinha added that from a culture of impunity where the rights of the individual had been violated for almost a decade, the people sought change to a new Sri Lanka, where ethnic, cultural, and linguistic diversity is respected, celebrated and valued.

The President and Prime Minister placed reconciliation as well as development as the topmost priorities of the government.

He went on to note that soon after the Parliamentary Election on the 17th of August, the President and the Prime Minister worked to forge a National Unity Government that is essential for the political and policy stability required for reconciliation to succeed. 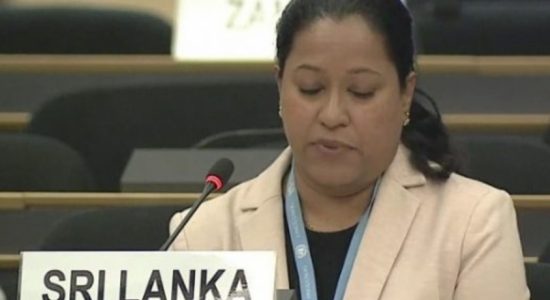