Comments made by Monitoring MP of External Affairs Sajin de Vass Gunawardene have sparked a great deal of debate among politicians and civil society.

Addressing the media on Friday MP Sajin Vass commented that he is not aware of any audit report pertaining to a contract for renovation work on the official residence of the Sri Lankan Permanent Representative to Geneva, which was awarded to an LTTE affiliate.

He stated that during his tenure, which has lasted nearly two years, he has not come across such a report. Referring to comments made by Ambassador Tamara Kunanayakam on the News1st Newsline segment, the MP stated that the ambassador had not handed an audit report pertaining the matter to him.

According to Wasantha Samarasinghe, the audit was carried out on  =February  13 and 14 based on the instructions issued by Secretary to the Treasury Dr. P.B. Jayasundara. He notes that according to the audit report the contract was issued to Shelvazug GMBH, owned by P.T. Thurairaja.  The North Central Provincial Councillor reiterates that it is a report drawn up by four state officials including a Deputy Treasury Secretary that show clear ties to the LTTE.

Wasantha Samarasinghe goes on to state that Shelvazug GMBH is a financial institute and that it is not a company that handles construction activities. He adds that the owner of the organisation P.T. Thurairaja was arrested with eleven others on charges of money laundering for the LTTE. The former JVP parliamentarian questions as to whether the four officials who compiled this report would suffer the same fate that befell Dr. Chris Nonis.

President of the BASL Attorney-at-Law Upul Jayasuriya commenting on the matter questions as to where the gods of justice are?  Jayasuriya stated that a situation has been created where frontline ambassadors of the country are literally being kicked out of office.  He states that current developments have shown that the contract to renovate the official residence of the Sri Lankan Permanent Representative to Geneva had been infact given to an affiliate of the LTTE which remains a banned organisation in Sri Lanka. He goes on to note that the diplomatic service of the country has collapsed.

UNP Parliamentarian Ranjan Ramanayake commenting on the matter says that, MP Sajin Vaas is acting like a childm as he states that he has not seen or heard of such a report. Ramanayake states that if Sajin Vass knowingly concealed the report it amounts to an act of treachery while if he has no knowledge of it that too shows that he not fit to hold his current position of monitoring MP to the Ministry of External Affairs.  The UNP parliamentarian goes on to note that the government continues to harbour wrongdoers and predicted that either Dr. P.B. Jayasundara or the four-member team that compiled the audit report could be assaulted soon..

When such an audit report is compiled who should it be given to?

Our attempts to contact both the Minister of External Affairs Prof. G.L. Peiris and Secretary to the Ministry of Finance Dr. P.B. Jayasundara proved to be futile. 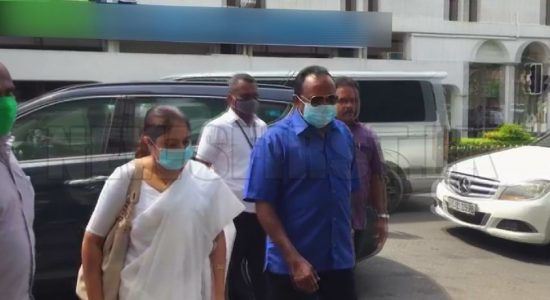