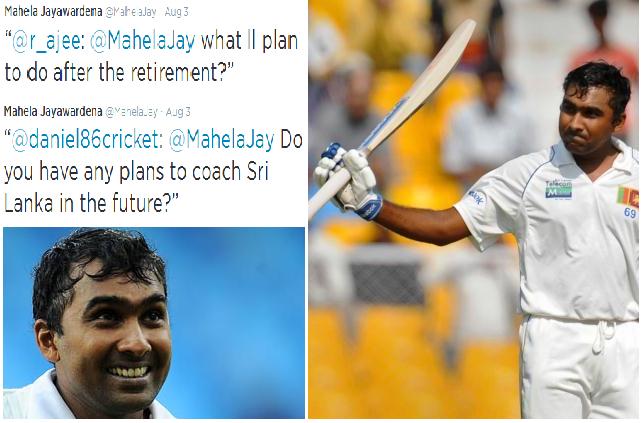 What will Mahela do after retirement from test cricket: revelation made on Twitter

What will Mahela do after retirement from test cricket: revelation made on Twitter

Sri Lankan batting star and former captain, Mahela Jayawardana is getting ready to say farewell to his Test career in the series against Pakistan starting on Wednesday, August 5.

Mahela’s fans engaged in a live Twitter conversation, where they asked many questions on his farewell to Test Cricket and other subjects as well.

Here are a few excerpts from the conversation.

“@MalinthaSen: @MahelaJay Are you sure this is the correct time to retire from Test Cricket? To me BIG NO!” Yes it is!

“@Rohanmax: @MahelaJay Sir! Will u jump into politics in future??? Praying u won’t. Hope u will answer this tough one???” I won’t …

“@r_ajee: @MahelaJay what ll plan to do after the retirement?” Sleep sleep and sleep more.

“@daniel86cricket: @MahelaJay Do you have any plans to coach Sri Lanka in the future?” I don’t have patients to do that