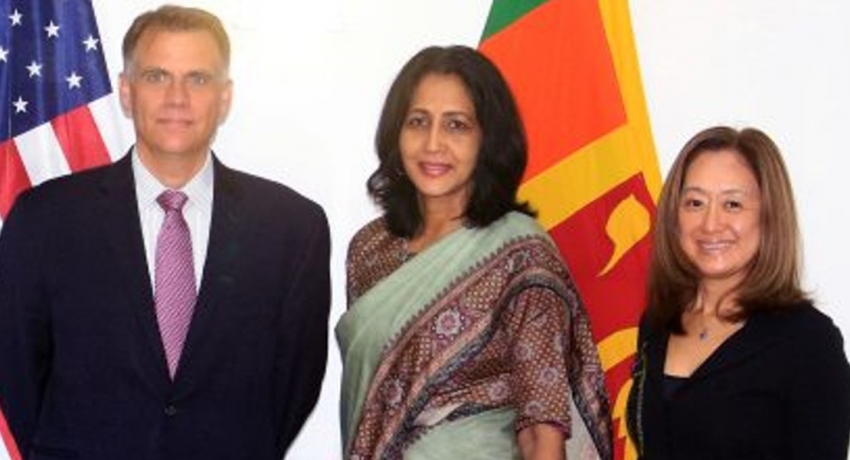 COLOMBO (News 1st); Secretary, Foreign Affairs Aruni Wijewardane met a senior delegation representing the United States Department of the Treasury and the Department of State led by the Deputy Assistant Secretary of Treasury for Asia Robert Kaproth and the Deputy Assistant Secretary of State for South & Central Asia Ambassador Kelly Keiderling at the Ministry of Foreign Affairs in Colombo on Tuesday 28 June, 2022.

Foreign Secretary Wijewardane welcomed the strong and multifaceted bilateral partnership between the two countries which is mutually beneficial and contributes, inter alia, towards the wellbeing of the people of Sri Lanka. The Sri Lanka side also discussed possible areas of support from the U.S. in addressing the multiple challenges faced by Sri Lanka due to the prevailing economic situation in the country.

The visiting delegation welcomed the opportunity to meet senior interlocutors of the Sri Lankan Government and discuss issues of relevance, as well as aspects of the long-term partnership of the U.S. with Sri Lanka.

The visiting delegation was accompanied by the Ambassador of the U.S. to Sri Lanka Julie Chung and other officials from the U.S.Department of Treasury, the U.S. Department of State and the U.S. Embassy in Colombo. Additional Secretary, Bilateral Affairs (West) Manisha Gunasekera; Director General, Economic Affairs Chandana Weerasena; and Director, Americas Chatura Perera of the Ministry of Foreign Affairs were associated with the Foreign Secretary at the meeting.

During their visit from 26 to 29 June 2022, the delegation also called on President Gotabaya Rajapaksa, and met Prime Minister Ranil Wickremesinghe, Minister of Foreign Affairs Prof. G.L. Peiris, Minister of Power and Energy Kanchana Wijesekera, Governor of the Central Bank of Sri Lanka Dr. P. Nandalal Weerasinghe and Secretary to the Treasury Mahinda Siriwardana.