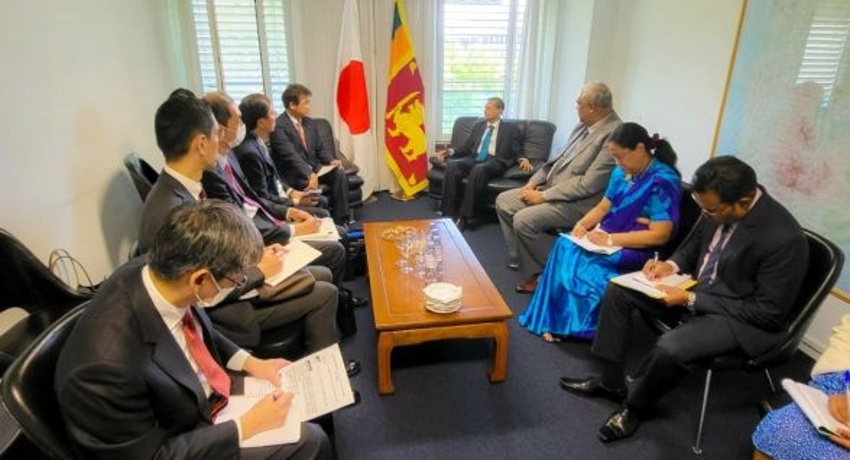 During the bilateral meeting with Miyake Shingo, Parliamentary Vice Minister for Foreign Affairs of Japan, the Foreign Minister referred to the longstanding and mutually supportive friendship between the two countries and observed that the relationship with Japan is vital for Sri Lanka. He noted that, over the decades, Japan has been a close partner of Sri Lanka, and expressed appreciation for the assistance provided, particularly in the areas of skills development, computer technology, the construction of the Sri Jayawardenepura Hospital, assistance to the Rupavahini Corporation, the significant assistance provided recently for medical and pharmaceutical items, as well as Japan’s supportive stance on Sri Lanka.

He also recalled the support extended by Sri Lanka to Japan at the San Francisco Conference at the conclusion of World War II. Sri Lanka wished to expand cooperation with Japan in the areas of digitalization, carbon credit, and ocean related activities including coast conservation, fisheries and global warming. Reference was also made to exploring cooperation in areas coming under the purview of the World Trade Organization.

The Parliamentary Vice Minister for Foreign Affairs of Japan noted that Japan, too, wished to deepen and strengthen cooperation with Sri Lanka in international fora. He added that Sri Lanka and Japan were marking the 70th anniversary of diplomatic relations between the two countries, and expressed the hope that long before the 100 year celebration, the relations between the two countries would be elevated to an even higher level. He expressed interest in furthering cooperation with Sri Lanka in the areas mentioned.

At the meeting with the Ambassador / Permanent Representative of the USA to the Human Rights Council, Ms. Michele Taylor, the Foreign Minister explained the issues faced by Sri Lanka, and the socio-economic situation in the country.

Meeting Lord Ahmed of Wimbledon, Minister for South Asia, North Africa, the United Nations and the Commonwealth at the Foreign, Commonwealth & Development Office, the Foreign Minister discussed the upcoming Commonwealth Summit to be held in Kigali, Rwanda.

The Foreign Minister observed that Sri Lanka considered the Commonwealth as an institution that can do much good in the present context. He also briefed Lord Ahmed on the situation in the country.