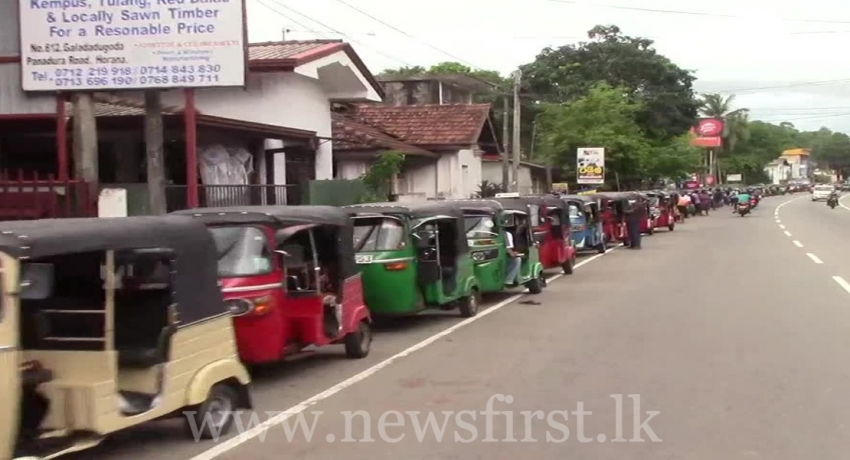 COLOMBO (News 1st); Sri Lanka’s fuel crisis is continuing to worsen, leaving people in long lines at filling stations, while other issues continue to pile up upon them.

Speaking to News 1st, a trishaw driver said that they have been waiting since 7.30 in the morning without eating, and demanded whether the country’s dollars have been looted by the 225 Parliamentarians.

The trishaw driver stated they have not been able to run any hires, while fuel shipments that visit the country are turning back because the Government cannot afford to pay for them.

The shortage of petrol, diesel and kerosene oil has worsened in the country, and many filling stations in Colombo and suburban areas did not receive fuel on Tuesday (17).

However, long queues were seen near filling stations that received fuel.

The people questioned, even if fuel tankers came along, are they supposed to swim to them and fetch the fuel?

About two thirds of filling stations in Horana had not received fuel today (17), while people were seen in line even during rains near a filling station that sold only diesel.

Horana residents then blocked the Horana-Colombo Road near the filling station in Koralaimma demanding fuel, and the group protested for nearly an hour.

However, later a bowser carrying petrol arrived at the filling station.

Filling stations in Anuradhapura did not have fuel this morning.

A person even arrived at the filling station with a fuel tank removed from a tractor, as fuel was not issued to cans. He demanded as to why how they can bring the tractors all the way 25 to 30 kilometers, and therefore he removed the fuel tank from the tractor and brought it with him.

However, a maximum of Rs. 1,000 fuel was being issued at the filing station.

Filling stations in Dehiaththakandiya received fuel after 15 days today. Farmers stated that they have not been able to cultivate using their machines as there is no diesel, and their cultivations have been stalled despite receiving water about 17 days ago.

Farmers, speaking to News 1st stated that farming has been hampered, and those who caused for this crisis to happen, must be punished for their heinous crimes without letting them go into hiding.

“Everyone who contributed to this crisis will suffer the consequences. I pray that such incompetent rulers do not come into power again,” one farmer said.

Filling stations in Kurunegala did not have fuel this morning, and long lines of vehicles were seen due to the fuel shortage.

A queued up consumer stated that they have been waiting in line in 5:15 AM.

Drivers who were in line in Tangalle were not able to purchase fuel.

Six filling stations in Kalutara did not receive fuel until this morning.

Long queues were also seen in Kandy today, while a person said that they slept while waiting in queue for fuel yesterday (16).

“I have slept at filling stations four times this month,” he stated.

Long queues were seen in Peradeniya as well.

Only one filling station in Hambantota had only received petrol today.

The filling station at the sixth milepost in Hingurakgoda, Polonnaruwa had not received diesel in 24 days.

However, the filling station in Pulasthigama had last received fuel 15 days ago.

The people, speaking to News 1st said that they have been heavily burdened due to the current crisis.

“We can’t imagine what to do now. We don’t need luxuries to be satisfied, just provide us with what we need,” they appealed the rulers.

Long queues were seen near filling stations in Jaffna and surrounding areas.

Some residents held a protest blocking the Matara-Akuressa road near the Akuressa CEPETCO filling station, and the Police eventually intervened to bring the situation under control.