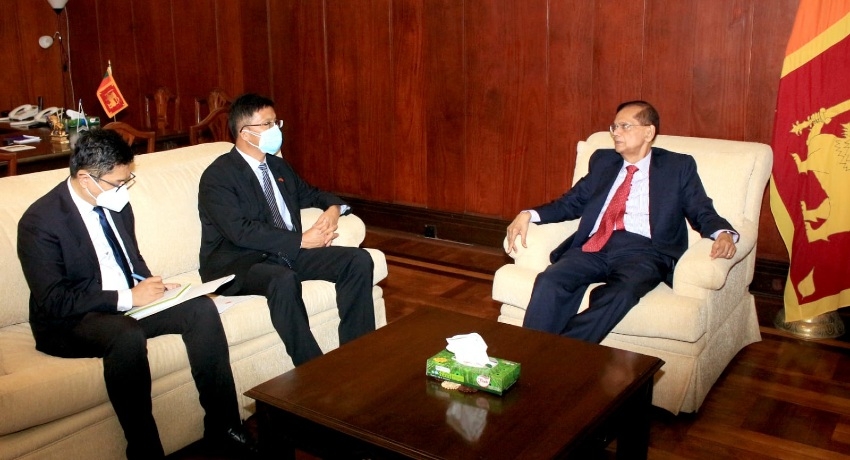 COLOMBO (News 1st); The Minister of Foreign Affairs, Professor G.L. Peiris met with the Ambassador of China, QiZhenhong, on 21 April at the Foreign Ministry.

While welcoming the Ambassador, Minister Peiris appreciated China’s continued assistance to Sri Lanka which had begun even before establishing formal diplomatic relations between the two
countries.

He also recalled the Chinese monuments erected in Sri Lanka with the funding of the Chinese Government.

The Foreign Minister also apprised the Ambassador of the current situation in the country and the shortage of energy which has adversely affected the economy of Sri Lanka.

He briefed the Ambassador on the measures which are being put in place by the Government to immediately overcome the prevailing situation, including the ongoing discussion with the IMF for financial assistance as well as reformulating Sri Lanka’s debt, and in that context Minister Peiris requested further assistance from China, particularly in the field of bridging finance during a difficult time.

The Ambassador of China stated that the Embassy of China in Colombo and Beijing were closely monitoring the evolving situation in Sri Lanka.

The China International Development Cooperation Agency (CIDCA) has pledged an urgent emergency humanitarian aid of RMB 200 million to Sri Lanka, including 5000 tonnes of rice (with
the previously announced 2000 tonnes), pharmaceuticals, production materials, and other essentials.

Furthermore, the Yunnan Province has announced a donation of RMB 1.5 million worth of food packages to Sri Lanka.

The Foreign Minister extended Sri Lanka’s profound gratitude to the Government of China for its unwavering and consistence support.

The discussions also focused on people-to-people exchanges, support at the multilateral fora, and poverty alleviation, among others.