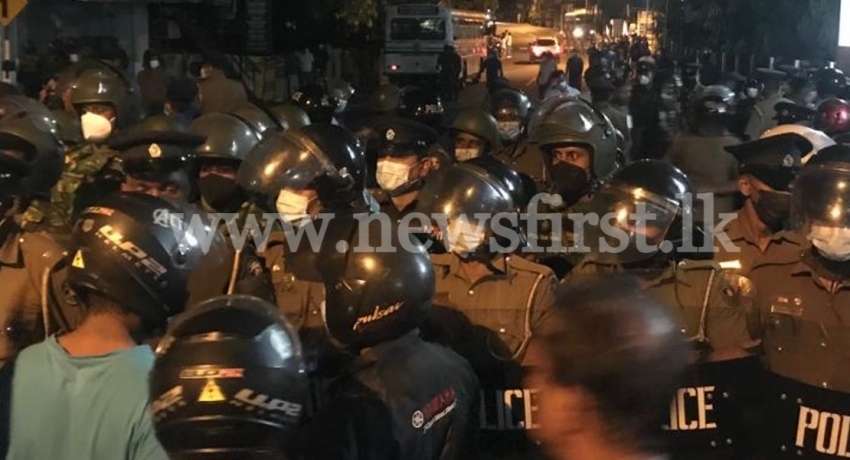 COLOMBO (News 1st); The Criminal Investigations Department has taken over the investigations on the Mirihana Protests, that took place on Thursday (31) night.

37 people were injured during the protest that took place in Pengiriwatte Road, Mirihana on Thursday (31) night.

They are currently being treated at the Colombo National Hospital.

53 persons who were engaged in the protest on Thursday (31) night at Mirihana, Nugegoda have been arrested by Sri Lanka Police. Police stated that a woman was among them.

Inquiry by Ministry of Public Security :

The Ministry of Public Security said that investigations are underway to identify the members of the organized extremist group that was involved in the Mirihana protest on Thursday (31) night.

Public Security Minister Rear Admiral (Retd) Dr. Sarath Weerasekara told News 1st that protesting is a democratic right of the people, however, that does not mean that one can set vehicles on fire and cause damage to property.

He said that those responsible for such incidents will be identified and will be brought before the law.

“We are aware that the people are facing a crisis with regard to gas, fuel, electricity etc. Such acts will not solve those crises,” he said adding that it is disturbing to see people wait in line for days and weel for those essentials.

Public Security Minister Rear Admiral (Retd) Dr. Sarath Weerasekara told News 1st that the unruly acts were committed by a group of extremists, and investigations are underway to determine if it involves religious extremism or terrorism.