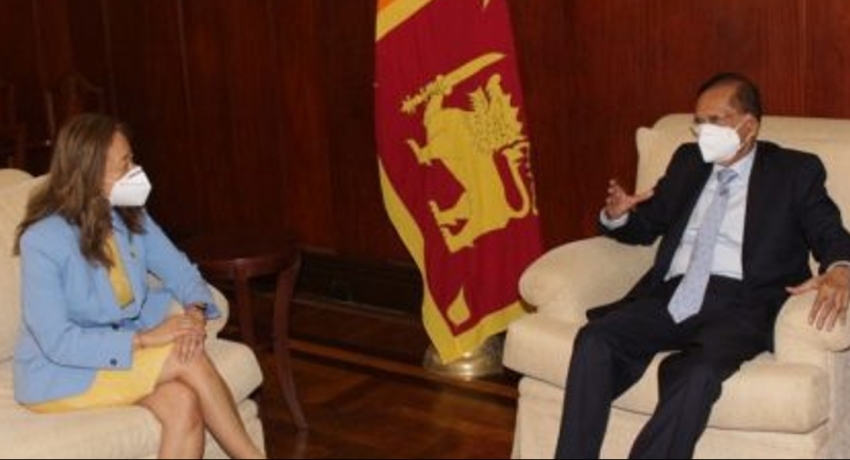 COLOMBO (News 1st); The Government of Sri Lanka is willing to work closely with the Biden Administration to elevate the longstanding relations between the two countries to greater heights, emphasized Foreign Minister Prof. G.L. Peiris to the newly appointed Ambassador of the United States, Julie Chung.

Minister Peiris extended a warm welcome to Ambassador Chung and stated that he looks forward to working closely with her during her tenure in Sri Lanka.

Ambassador Chung assured that the U.S. remains committed to the promotion of a strong political and economic partnership with Sri Lanka that would contribute towards the country’s prosperity.

Furthermore, she stated that the U.S. wishes to deepen relations with Sri Lanka and be a constructive and productive partner for mutual benefit.

Minister Peiris also apprised the U.S. Ambassador on the progress being made by the GoSL with regard to reconciliation and human rights. Both parties welcomed the arrangements being made to convene the 4th Session of the Sri Lanka – U.S. Partnership Dialogue later this month.

Senior officials of the Ministry of Foreign Affairs and the Embassy of the United States of America in Colombo were associated with the meeting.

Meanwhile, the Ambassador also stated in a tweet that she is committed to the religious pluralism of Sri Lanka and the prosperity of all its citizens.

The Jami Ul-Alfar Mosque is a stunning landmark & testament to Sri Lanka’s diverse cultural heritage. Thank you to the mosque trustees for the tour & discussion on the rich history of Sri Lankan Islam. 🇺🇸 is committed to religious pluralism & the prosperity of all 🇱🇰’s citizens. pic.twitter.com/bLBgt2f5YK