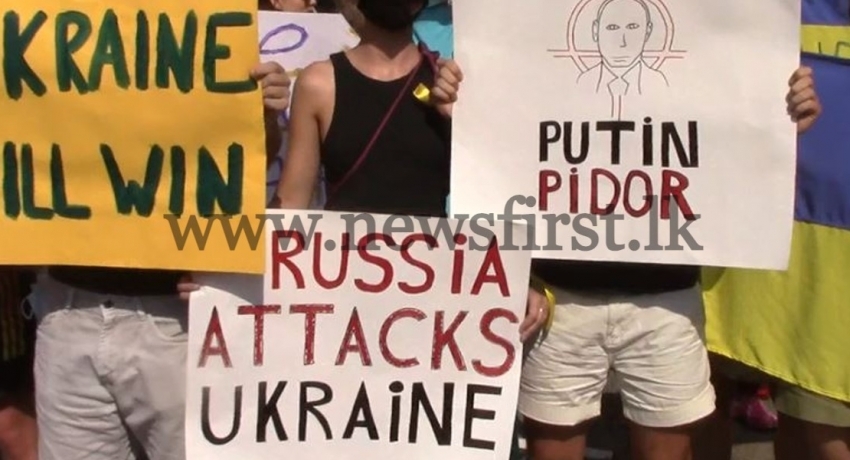 COLOMBO (News 1st): More than 100 Ukrainian nationals in Colombo protested opposite the Russian Embassy on Monday (28) against the Russian invasion of Ukraine.

The protestors were demanding that Russian President Vladimir Putin end his campaign against Ukraine, and order Russian troops out of Ukrainian territory.

“My fellow countrymen are dying in Ukraine. I have no way of contacting my father. I have lost touch for more than 5 hours. Russians have done nothing to end this war,” said Anna, a Ukrainian tourist in Sri Lanka.

Heavy security was provided to the fortified Russian Embassy in Colombo 7, during the protest.

Russia has unleashed attacks on Ukraine after months of massing troops near its borders.

Dozens of military sites have already been hit by Russian fire, and casualties are mounting. The repercussions are being felt beyond Europe as rising geopolitical risk and volatile energy and financial markets rock Asia.

The platform for the negotiations between Russia and Ukraine in Belarus has been prepared, Belarusian foreign ministry spokesman Anatoly Glaz said on Monday (28).

Talks between Russia and Ukraine have not yet begun, as the negotiators are just arriving at the venue.

Belarusian President Alexander Lukashenko told Ukrainian President Volodymyr Zelenskyy that “all aircraft, helicopters and missiles” deployed in Belarus will remain on the ground during the talks.