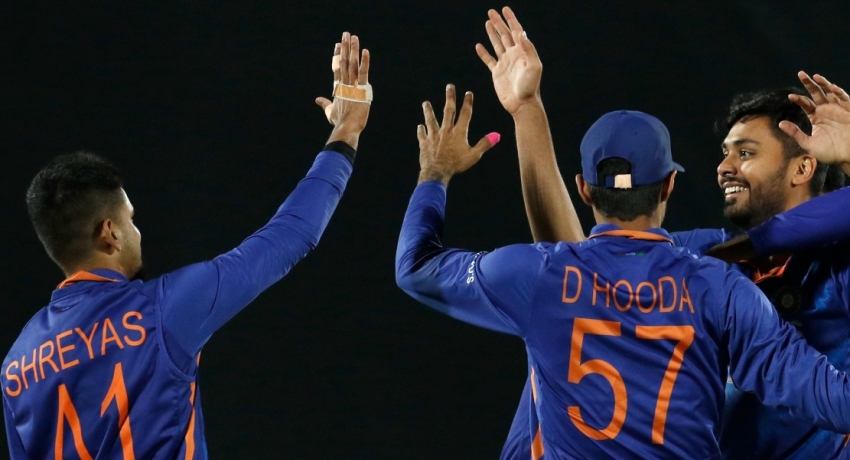 Shreyas Iyer again starred with the bat as India completed a 3-0 whitewash against Sri Lanka by registering a six-wicket victory in Dharamsala.

Dasun Shanaka won the toss and opted to bat first on a pitch that had a tinge of green on it. With the series in the bag, India made a host of changes with Kuldeep Yadav, Ravi Bishnoi, Mohammed Siraj and Avesh Khan being all drafted in.

Siraj and Khan made an immediate impact with the new ball, as the Sri Lankan batters were all at sea against the pace and seam movement. The visitors could only score 18 runs in the Powerplay, losing three wickets. Danushka Gunathilaka went for a big pull against Siraj but chopped it onto his stumps.

Avesh Khan would then deliver two strikes in back-to-back overs. Pathum Nissanka was struggling at the crease and in order to release the shackles, went for a big hit, which bought an end to his knock of 1. Charith Asalanka also did not last long, skying one to Sanju Samson off Khan’s bowling to be dismissed for 4.

The end of the Powerplay did not bring an end to Sri Lanka’s misery. Janith Liyanage was completely outfoxed by a Ravi Bishnoi googly and saw his stumps being rattled. He was gone for 9.

Dinesh Chandimal and Dasun Shanaka then steadied the ship a bit but their resistance was finally broken by Harshal Patel. Chandimal played a fierce cut shot but Venkatesh Iyer held on at backward point to bring to his knock of 25.

Shanaka would then continue on his brilliant form from the previous match. He started to unleash after the 16th over, hitting the ball cleanly. Chamika Karunaratne stuck around at the other end as Sri Lanka slowly started to creep towards a total that would give their bowlers something to defend.

Playing a captain’s knock, Shanaka brought up his half-century, scoring 74*in only 38 deliveries, hitting nine fours and two sixes. His knock helped Sri Lanka to a score of 146/5 with the onus now on their bowlers to avoid a clean sweep.

Chasing the target, Rohit Sharma and Sanju Samson walked out to open the innings. But it was a quick walk back to the pavilion for the Indian skipper as Dushmantha Chameera got the better of him again. Dismissing him for the sixth time, Rohit was gone for 6 with Chamika Karunaratne taking a safe catch at mid-off.

Shreyas Iyer walked out and immediately continued on with his sizzling form, which he showcased throughout the series. Timing it beautifully, he pierced the field with the utmost of ease.

Samson also started to get into his stride, opening his blade as the end of the Powerplay approached. Chamika Karunaratne though struck at the opportune moment, getting the ball to shade away from Samson, which induced a thick outside edge. The keeper would gleefully accept the catch as Samson walked back for 18.

Iyer would stitch together a decent partnership with Deepak Hooda who looked quite comfortable at the crease. Hooda would rotate strike sensibly with a couple of big shots scattered in between before Lahiru Kumara bowled him with a terrific yorker for 21.

Venkatesh Iyer couldn’t last long as Kumara deceived him with a slower short delivery. Meanwhile, Shreyas Iyer continued on his merry way, bringing up his third half-century of the series.

Alongside Ravindra Jadeja, he ensured that India had no further hiccups to complete the chase. Iyer scored 74* while Jadeja chipped in with a handy 22* as India won the contest by six wickets with 19 balls remaining.

With this, India completed a 3-0 clean sweep and extended their winning streak in T20Is to 12.