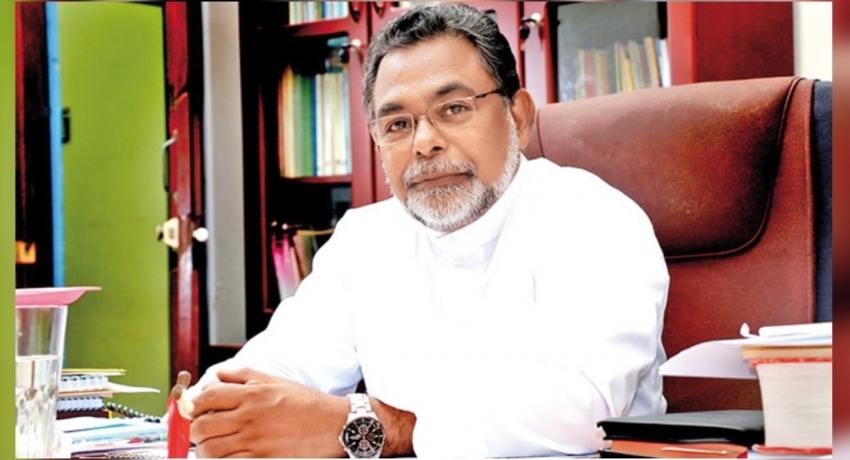 COLOMBO (News 1st); Rev. Fr. Cyril Gamini Fernando, the Spokesperson for the Archdiocese of Colombo on Monday (14) expressed concern over the return of the white van culture in Sri Lanka.

Commenting on the arrest of Activist Shehan Malaka Gamage, he noted that the activist was arrested by force by a group who arrived in a white van and claimed to be personnel from the Criminal Investigations Department.

“We cannot approve this conduct, as such a culture is not something that is good for democracy,” he warned.

“Everyone has the freedom to speak and express. That is a fundamental right of every person,” he said adding, that however, there appears to be an emergence of a culture where people are arrested and detained for criticizing the state.

Rev. Fr. Cyril Gamini Fernando also said that the Cardinal condemned the attack on the residence of journalist Chamuditha Samarawickrama and the arrest of Shehan Malaka Gamage.

Police Spokesperson SSP Attorney-at-Law Nihal Thalduwa told News 1st that Gamage was arrested for a comment he made with regard to the Easter Sunday attacks, at a recent media briefing.

He was recently summoned to the CID and a statement was recorded as well, on the same matter.

The Criminal Investigations Department had sought advice from the Attorney General and upon instructions received the CID arrested Shehan Malaka Gamage, noting that he had committed an offense, said the Police Spokesperson.

The residence of veteran journalist Chamuditha Samarawickrama was attacked by an unknown group on Monday (14) morning.

Four unidentified men in a white van had forced their way into the Cambridge Court housing complex in Piliyandala early on Monday (14) and held the security officer at gunpoint before proceeding to the residence of Chamuditha Samarawickrama.

“I heard a knock on the gate at around 2 AM,” said the security officer adding that even before he could speak a word, one of the men held him from his shirt, forced him to sit inside the security hut, and held a gun to his head.

The unidentified group of men had proceeded to Chamuditha Samarawickrama’s residence at attacked it with stones and human waste, causing considerable damage to the residence.

Journalist Chamuditha Samarawickrama told News 1st that he and his wife were asleep and were woken by a loud noise.

“We noticed repeated strikes on the roof and we decided to switch on the light. Thereafter, the strikes reduced. When we looked out we discovered the stones. The glasses were also destroyed. They even threw feces at the residence,” he said.

The Police Emergency Hotlines was contacted by the journalists, and the Piliyandala Police had immediately visited the residence for investigations.

Fellow journalists have condemned the attack on Chamuditha Samarawickrama’s residence.