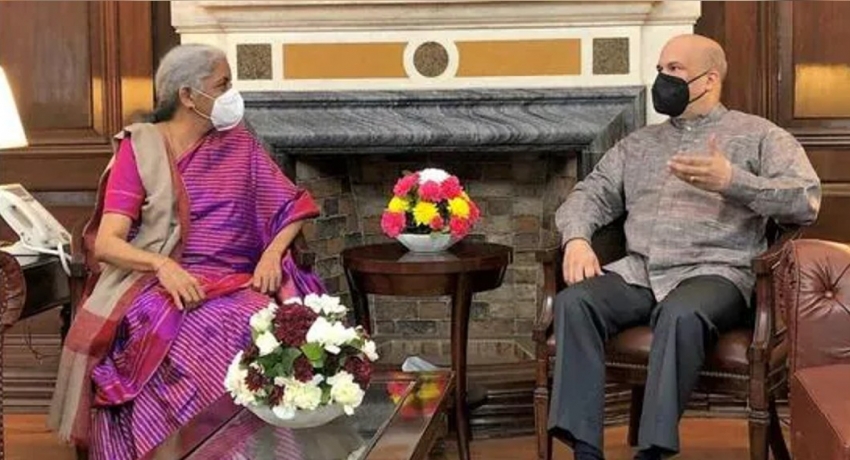 (News 1st); Finance minister Nirmala Sitharaman and Sri Lankan high commissioner Milinda Moragoda on Friday (11) discussed the finalisation of a $1-billion line of credit to be provided by India to the island nation to purchase essential items to tide over an economic crisis.

Moragoda met Sitharaman and conveyed Sri Lanka’s appreciation for the support provided so far by India. He thanked her for the personal interest she has taken in supporting Sri Lanka at this “critical time”, according to a statement from the Sri Lankan high commission.

“The high commissioner also followed up with minister Sitharaman on the early finalisation of the $1-billion line of credit to purchase essential items, which is part of the four-pillar bilateral economic cooperation concept,” the statement said.

As part of the four pillar package decided during Sri Lankan finance minister Basil Rajapaksa’s visit to New Delhi last year, the Indian side has so far provided a $500-million line of credit for purchasing fuel and a currency swap of $400 million under the Saarc facility. The Indian side has also deferred the payment of $515 million that was due to the Asian Clearing Union.

Progress in finalising the $1-billion line of credit was last reviewed at a virtual meeting between Rajapaksa and external affairs minister S Jaishankar on January 18.

Moragoda also thanked Sitharaman for the assistance provided by India to Sri Lanka as envisaged under the four pillars of cooperation and discussed arrangements for Rajapaksa’s forthcoming visit to New Delhi.

The four-pillar package envisages India supporting Sri Lanka in terms of food and health security, energy security, a currency swap to address the balance of payment issue and facilitating Indian investments in different sectors. The $1-billion line of credit will allow Sri Lanka to make emergency purchases of food, medicines and other essential items.