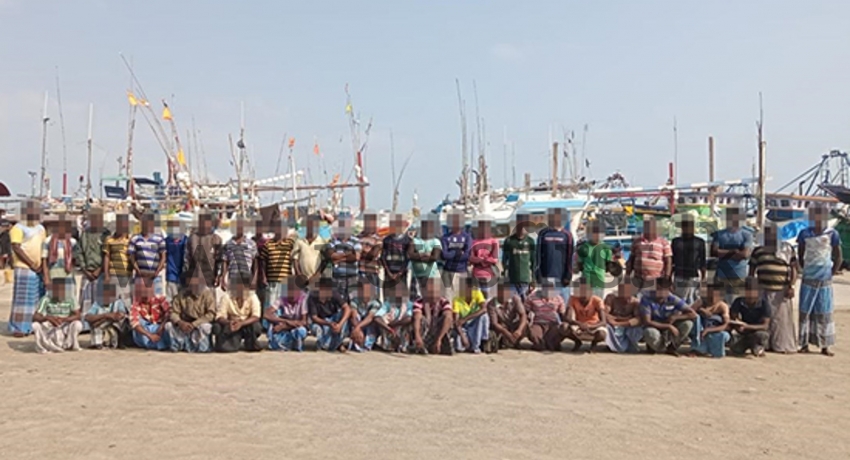 COLOMBO (News 1st); Sri Lanka has planned to deport a total of 56 Indian fishermen who were arrested and remanded for illegally entering the Sea of Sri Lanka.

The 56 Indian fishermen were arrested by the Sri Lanka Navy while illegally fishing in the northern seas of Sri Lanka.

They were first produced to the Kytes Magistrate’s Court on the 19th of December 2021 and were ordered to be remanded.

On the 25th of January 2022, these 56 Indian fishermen were produced to the Kytes Magistrate’s Court against where it was ordered for them to be handed over to the Mirihana Immigration Detention Center, to be deported.

These 56 Indian fishermen were moved to the Quarantine Centre in Iyakachchi, Jaffna to undergo quarantine and upon completion of the quarantine period, they were moved back to the Jaffna Prison.

As per the court order, the Indian fishermen will be handed over to the Mirihana Immigration Detention Center, to be deported, on Wednesday (9).

The decision to deport the Indian fishermen comes after Indian External Affairs Minister Dr. S Jaishankar in a meeting with his counterpart from Sri Lanka, G L Peiris, requested for early release of Indian fisherman detained in Sri Lanka.

The issue of fishermen remains a constant point of concern between Indian authorities and Sri Lanka.

In a special operation conducted by Sri Lanka Navy and Coast Guard, 02 Indian trawlers with 21 Indian fishermen were held for poaching in Sri Lankan territorial waters, off Kovilan and Point Pedro Lighthouse, Jaffna on the night of 31st January 2022.

On the 7th of February 2022, Sri Lanka Navy took hold of 03 Indian trawlers and 11 Indian fishermen for poaching in Sri Lankan waters.

In the operation, Fast Attack Craft of the 4th Fast Attack Flotilla in the Northern Naval Command seized 03 Indian trawlers for poaching in Sri Lankan waters close to the Delft Island in Jaffna, via International Maritime Boundary Line (IMBL).

The Navy also nabbed 11 Indian fishermen aboard the poaching vessels which were engaging in the illegal fishing method known as ‘bottom trawling’.