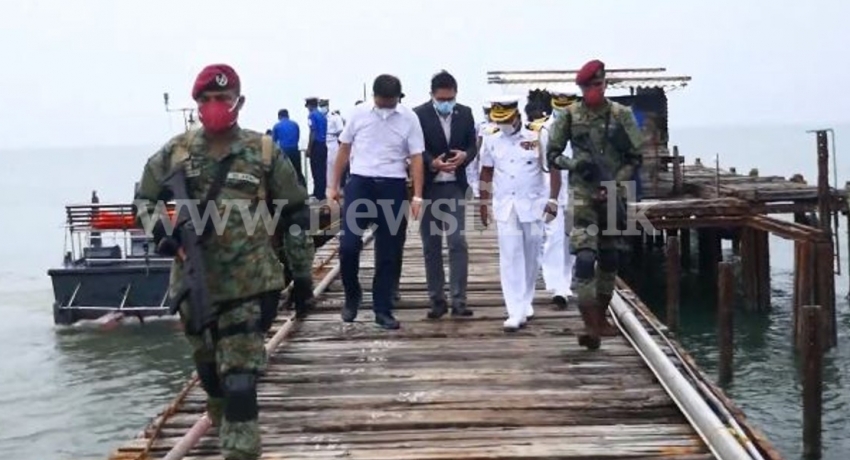 “This is just the beginning”, says Chinese Ambassador as Jaffna visit ends

“This is just the beginning”, says Chinese Ambassador as Jaffna visit ends

COLOMBO (News 1st); The Chinese Ambassador to Sri Lanka made an open-ended closing remark to News 1st as he concluded his three-day visit this afternoon.

The beginning of what remains unanswered.

‘This is the End, but also the Beginning’, is what the Chinese Ambassador to Sri Lanka said following a historic visit to Adam’s Bridge in the North of Sri Lanka on Friday (17).

Adam’s Bridge, also called Rama’s Bridge, is a chain of shoals, between the islands of Mannar, near northwestern Sri Lanka, and Rāmeswaram, off the southeastern coast of India.

The bridge is 30 miles (48 km) long and separates the Gulf of Mannar (southwest) from the Palk Strait (northeast).

Ambassador Qi Zhenhong was visiting the Mannar as part of his goodwill tour to the North of the Island.

The Ambassador visited the 3rd shoal on Adam’s Bridge which is located some 17 nautical miles off Sri Lanka’s coast.

According to News 1st correspondent Senitha Senanayake, the Ambassador was escorted close to the 3rd shoal by the Sri Lanka Navy’s Inshore Patrol Craft and he was then transferred to a small battle boat to visit the 3rd shoal, which can be seen from India’s Rameswaram.

The visit to Mannar comes weeks after a delegation from India’s Adani Group visited Mannar to inspect a location for their proposed USD 1 Bn investment for a 1000 MW renewable energy project,

Notably, the Chinese Ambassador was given special military protection during his three-day visit to the North of Sri Lanka.