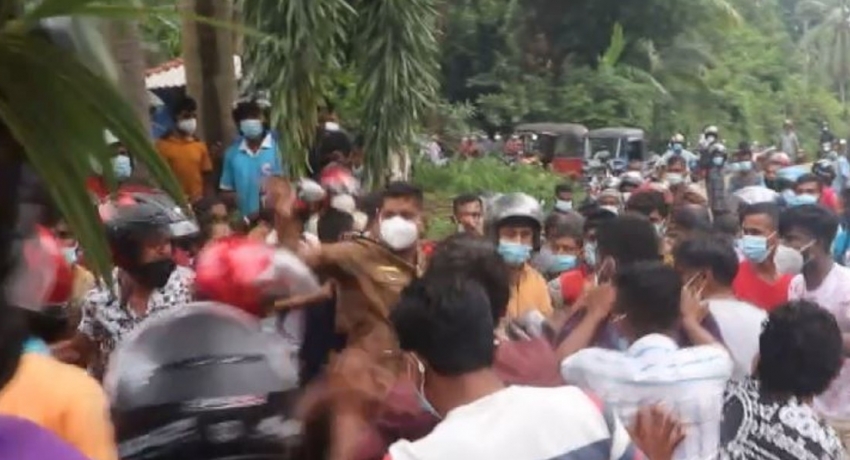 COLOMBO (News 1st); A tense situation arose between the Police and the residents of Panamura after a suspect who was in Police custody died.

The suspect has been arrested yesterday (16), following a complaint regarding a family dispute.

Police informed the relatives of the suspect that the man had attempted to hang himself, and had subsequently succumbed to his injuries.

Along with this news, a large number of people today engaged in a protest in front of the Panamura Police Station, and caused for the Embilipitiya Kolonna road to be blocked for some time as well.

Moreover, a cousin claimed that family problems at home is not a reason that a man should be killed behind bars, and justice needs to be carried out regarding the matter.

Meanwhile, Minister of Public Defense Sarath Weerasekara making a statement at the Parliament today (17) claimed that the allegations of the deceased being involved in the massive protest which was held yesterday (16) are false, and stated that the suspect has no connection whatsoever to the protest organized by the Opposition yesterday.

He further stated that the deceased, identified as a 37-year old resident of Panamure, was arrested by the Police at 10:30 p.m. yesterday following a complaint lodged by his daughter regarding familial abuse, and the deceased had attempted suicide at around 03:30 a.m. in the early morning.

The Minister of Public Defense added that the relevant incident is not a fault of the Police, and refuted all allegations levelled against the Police as well.