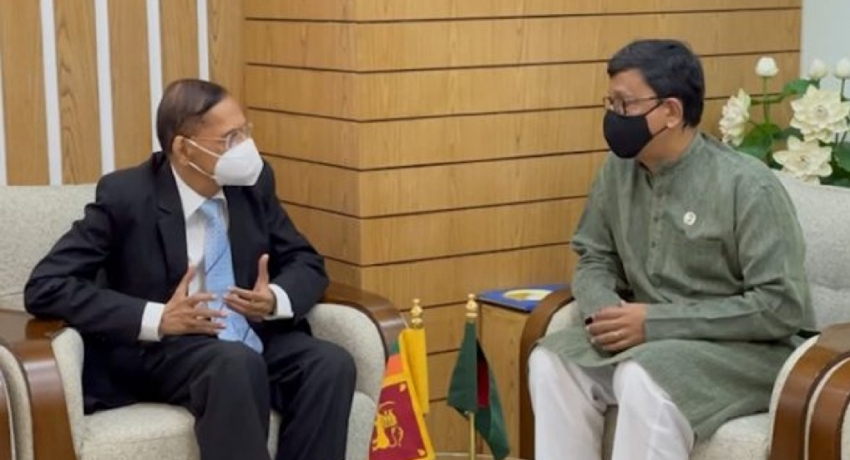 Joint working group to be implemented between Sri Lanka & Bangladesh

Joint working group to be implemented between Sri Lanka & Bangladesh

COLOMBO (News 1st); The State Minister of Shipping of Bangladesh, Khalid Mahmud Chowdhury and Foreign Minister Prof. G.L. Peiris discussed the implementation of a joint working group on shipping between Bangladesh and Sri Lanka, which is due to be held in Colombo in the early months of 2022.

During a meeting with the State Minister of Shipping, Mahmud Chowdhury yesterday (16), Prof. G.L. Peiris also discussed the collaboration of the two nations in the field of shipping, and also agreed for enhanced cooperation between Chittagong and Sri Lankan ports, which the Minister agreed will be a win-win situation for both countries due to the time saving and financial improvement factors.

The two Ministers also discussed the implementation of a transit hub between Sri Lanka and Bangladesh, which can be utilized for access into the Gulf and the Mediterranean.

The Bangladesh Minister indicated the importance being currently attached by Prime Minister Sheikh Hasina to the subject of shipping in Bangladesh, with initiatives for the development of several other ports including the Matarbari in Cox’s Bazar district, which is being developed as a deep sea port with the assistance of Japan.

The Ministers decided that the next step would be the early convening of the Joint Working Group since the last meeting was in Dhaka in 2014. Issues relating to feeder services and a comprehensive coastal shipping agreement would be among the subjects on the agenda at the meeting in Colombo.

The two Ministers noted with satisfaction the robust economic cooperation between the two countries and agreed that the shipping sector is a vital component for strengthening the relationship further.