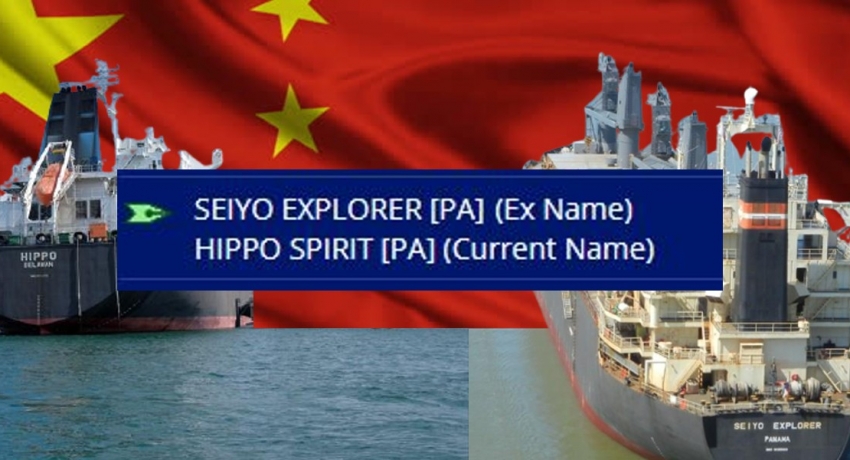 Hippo Spirit which was carrying 20,000 metric tonnes of fertilizer left China on the 22nd of September to reach Sri Lanka.

However, after confirmation came to light, that the stock of fertilizer on board the Ship contained hazardous bacteria, the Sri Lankan Government decided to suspend the importation of fertilizer.

Thereafter, the ship set sail for Singapore and according to the Live AIS Vessel Tracker, the ship is anchored at the Malakka Strait.

According to the data shown in the Live AIS Vessel Tracker, the ship has been anchored at the Malakka Straight for several days now.

The Live AIS Vessel Tracker also shows that the next destination of the Hippo Spirit Ship is Colombo and that the ship is to arrive in Colombo.

According to a ship-tracking website, both the Hippo Spirit and the Seiyo Explorer appear to share the same IMP number, which is 9135523.

The IMO number is a mandatory prerequisite for sailing through the SOLAS regulation XI/3 which was adopted in 1994.

According to vessel-tracking data, the Seiyo Explorer has already closed in on Sri Lanka and it is located in the southeast part of the Sea of Sri Lanka.

Director-General of Agriculture Dr. Ajantha De Silva confirmed to News 1st that he was informed that the vessel is located 12 nautical miles away from Sri Lanka.

On Sunday (24), the Seiyo Explorer / Hippo Spirit was located close to the Little Basses Reef, said the Harbour Master of the Colombo Port, adding that however, it was not detected thereafter.

While these developments were taking place, Sri Lanka agreed to re-test the rejected Chinese Organic Fertilizer by directing samples to an institution that can be accepted by both Sri Lanka and China, said State Minister Shasheendra Rajapaksa exclusively to News 1st on Tuesday (26).

“The Chinese have said that the tests carried out in Sri Lanka cannot be accepted because the laboratories are not accredited,” he said.

“We were not forced into this, but they only made a request. We made it clear that the shipment cannot reach Sri Lanka. They said we need to understand the quality of the fertilizer that is shipped by the Chinese company to 16 other countries,” he further added.

The Chinese Ambassador to Sri Lanka and representatives from Qingdao Seawin Biotech Group Co., Ltd. have made a request from the Agriculture Ministry to re-test the rejected Chinese Organic Fertilizer via a third party.

This development came after the Colombo Port Harbour Master issued stern directives preventing its entry to the port.