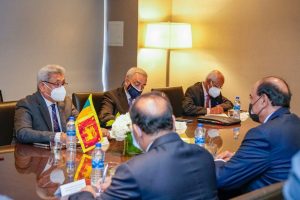 Recalling the fifty years of close and friendly diplomatic relations between the two countries, the two leaders noted the need to further strengthen relations.

President Rajapaksa pointed out that a large number of Sri Lankans work in Kuwait and called for further opportunities for skilled workers.

The President informed the Prime Minister of Kuwait of the control measures taken to prevent the spread of COVI-19 and the vaccination program being carried out in the country, and pointed out the possibility of strengthening bilateral relations when the pandemic ends and the world returns to normalcy.

The President also drew the attention of the Kuwaiti Prime Minister to the investment opportunities available to the State of Kuwait in the port city, solar and wind energy and oil refining sectors.