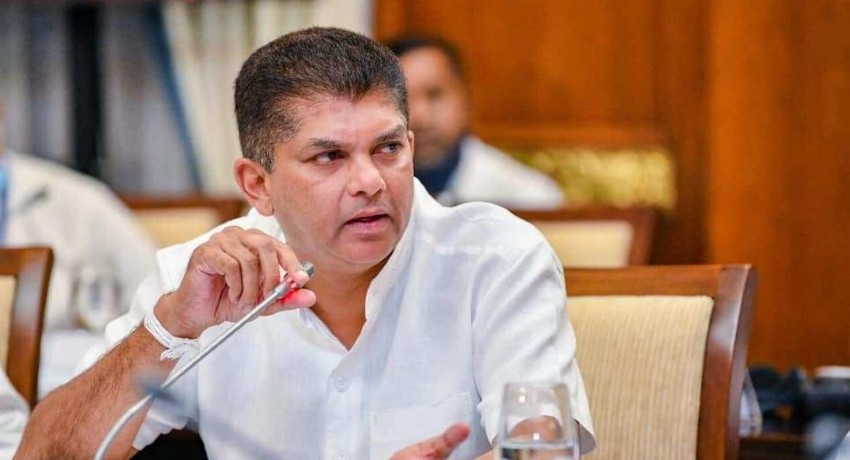 COLOMBO (News 1st); Multiple factions have called on the government to institute legal action against Lohan Ratwatte, for his involvement in the incidents at the Welikada and Anuradhapura Prisons.

On Wednesday (15), the President had accepted Ratwatte’s resignation request, where the latter accepted responsibility for the incidents at the Welikada and Anuradhapura Prisons.

Local and International bodies have urged the government to institute legal action against him for intimidating prisoners.

The Department of Prisons told News 1st that a Prisons Commissioner was deployed to Anuradhapura to inquire into the incident.

According to the Civil Aviation Authority, domestic flights are not operated after sunset at present.

Its Chairman Upul Dharmadasa told News 1st that flying after sunset is an unnecessary and unwanted risk.

In addition, the CAA only allows domestic flights between Jaffna, Batticaloa, and Ratmalana.

Therefore, the helicopter that flew to Anuradhapura is believed to be a privately owned one.

Sri Lanka Air Force Spokesperson Group Captain Dushan Wijesinghe told News 1st that SLAF does not operate helicopters after sunset and services are only provided to the President and the Prime Minister at present.

Concerns have also been raised as to whether Sri Lanka allows boarding a plane or helicopter under the influence of alcohol.

The Civil Aviation Authority said that there is no test performed for intoxication prior to boarding, however, service will be denied if a person is found to be heavily intoxicated.

Yet, the State Minister had visited the Anuradhapura Helicopter using a helicopter.

Concerns have also been raised about what exactly happened inside the Prison.

The Tamil National People’s Front & multiple other bodies have revealed the horrors that had taken place.

The leader of the Tamil National People’s Front Gajendra Kumar Ponnambalam revealed that the State Minister had gone into the Anuradhapura Prison and summoned the Tamil Prisoners held under the PTA.

“He forced two of them to kneel before him. Then he had used his pistol and aimed at their heads and bodies, before saying that he can kill them in an instant,” said the MP adding the State Minister had threatened the prisoners held under the PTA, which is also being highlighted at the UN Human Rights Council.

“The State Minister had created a scene at the Prison demanding to see the Gallows, to show-off to his friends,” said opposition Lawmaker Ashok Abeysinghe, who also confirmed that a weapon was used to terrorize the inmates.

Wasantha Samarasinghe, a political activist said there are serious concerns with respect to the ‘National Security’ of the President, following these events.

Lohan Ratwatten is no longer the State Minister of Prison Management and Prison Rehabilitation and it is not clear if he also resigned from his position as the state Minister of Gem and Jewellery.

Therefore, Ratwatte will continue to enjoy the benefits awarded to a State Minister in the Sri Lankan Government.

Opposition Leader Sajith Premadasa and several other movements have called for legal action to be taken against Ratwatte.

Attorney-at-Law Senaka Perera from the Committee for Protecting Rights of Prisoners (CPRP) said Prison Officers had allowed the State Minister to enter the premises while he was intoxicated and attempts have also been made to wipe clean the CCTV cameras in the prison.

‘He cannot go into the prison as and when he pleases, just because he is a Member of Parliament. Visitation is only from 05:30 AM to 05:30 PM, he added.

Sudesh Nandimal also from the same movement said Lohan Ratwatte needs to be rehabilitated, rather than assigning him the subject of Prisoner Rehabilitation.

Pubudu Jagoda from the Frontline Socialists Party said the President had failed to institute disciplinary action against Ratwatte until the resignation letter was submitted.

He called on the Government to announce its position with regard to this incident.

Th Samagi Jana Balavegaya, The Tamil National Alliance, and several other movements have called for an investigation into the incident.