COLOMBO (News 1st): Former MP and JVP member Sunil Handunetti says that the Government is taking revenge on the people by raising the cost of living.

The MP, speaking to the media yesterday (29), pointed out that the Government is responsible for the sugar scam;

” They declared the MRP for Sugar last year, issuing a gazette claiming that Sugar should be Rs. 85. However, a big tax scam took place during the very same time.  Government’s friends and close allies earned much money out of the Rs. 0.25 cent tax implemented on sugar. The Government even promised the people that 90,000 metric tons of sugar exists in stores. Then they removed the very MRP they implemented in April. And now the Trade Minister says that he cannot do anything even if the price of sugar goes up by Rs. 100. Not only retailers but wholesale traders also keep Rs. 100 – 120 of a profit and sell the sugar, which used to sell for the price of Rs. 80. It should be questioned whether this is a problem with regard to the dollar in the International market of is it really a problem with regard to the Government’s allies hiding stocks of sugar and selling it at high prices.”

Handunetti further spoke on the Government’s motive to increase prices.

“The consumer is experiencing the downfall of the Government enabling its allies to have monopoly over trade. Rice, Dhal, potato, onions, sprats, coconut oil have all risen in prices. Not only that, but the prices of bakery items, gas and milk powder has also risen. It is a tragedy that the consumer is living through this process, especially during the COVID-19 pandemic,” He said.

He further claimed that the Government seems to be taking revenge on the people because during the time of a pandemic, as it increased the prices of medicine.

” State Minister Ajith Nivard Cabraal said that we should care about the daily wage earners and should reopen the country. But it does not seem like the Government cares for any of the citizens when the cost of living gradually increases. So who does the Government care about? a limited few who funds the Government and who have made the pandemic a business. ” Handunetti mentioned.

” The Government does not care about people. We see today that they are constructing a jogging track at the Parakrama Samudhraya. Indeed we do need jogging tracks, but is it really the need of the country right now? The Finance Ministry is trying to import vehicles, are these really the needs of the people in the country? How can they do these actions when the Government cannot even afford to give the people Rs. 2,000?” He added. 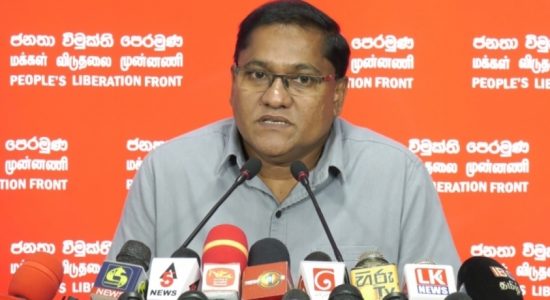