COLOMBO (News 1st); President Gotabaya Rajapaksa in a special televised address to the nation said 100% of the over 30 population will be fully vaccinated by the 10th of September.

As of 31st August, more than 81% of the over 30 population will be fully vaccinated, said the President

He said that at present around 98% of the over 30 population have been administered with a vaccine against COVID-19 and 43% of them are fully vaccinated.

President Rajapaksa also added that the country has a consignment of 03 mn doses for second dose administration while another 03 mn doses are to arrive in late August.

The President believes that given the situation of administering the vaccines, the number of COVID-19 infections and fatalities would drop.

The President also noted despite facing economic issues the government did not resort to cut down the salaries and allowances of those employed in the public sector.

‘Despite our reserves dropping, we did not evade from settling our debts,’ said the President.

Due to loans obtained by previous governments, we were to pay a massive $ 04 Bn debt installment that too was settled on time, he said.

The President said that imposing a lockdown again will seriously impact the country’s economy, adding that ‘ it is not something that we can bear.’

Sri Lanka’s apparel sector had received a large number of orders for exports and if we fail to supply on time, we will lose a great number in foreign revenue, said the President.

He went on to note that the government is taking measures to revive the fallen tourism sector, adding that 200 tourists are visiting Sri Lanka daily.

‘If we lock down the country, we will have to restart the process of bringing tourists,’ he said adding that the country’s economy will suffer greatly when relief will have to be provided once again.

‘The People need to understand the impact caused by imposing a nationwide lockdown,’ said the President.

Sri Lanka must take advantage of the opportunities that other countries are taking with the revival of the global tourism industry, said the President.

‘We cannot allow the country’s economy to collapse by not doing so,’ he added.

‘We need to understand the reality. This is an issue faced by the entire world. All countries are accepting the new normal. As a government we have taken all the necessary measures,’ said the President.

The President said even though the government has done everything it can do including the supply of oxygen, establishing Intermediate Care Centers, and implementing the vaccination drive, it is the responsibility of the doctors to manage the patients.

The President also commended the services of doctors, nurses, and all health sector staff, who had operated during this period while putting their own lives at risk.

The President added that it is clear that this is not the time for strikes and protests adding one must not take the country towards anarchy.

President Gotabaya Rajapaksa said the government is committed to ensure it settles foreign debt on time, pay the salaries on time, and provide relief, and in order to do so the country’s macroeconomy needs to be managed.

The President said he instructed the health sector to conduct an antigen test at least once a week for the over 60 population who are suffering from chronic diseases.

President Gotabaya Rajapaksa said if a long-term lockdown is to be imposed in the future, all citizens must be prepared to make sacrifices.

‘Everyone must understand the situation in the country and must be prepared to take the country forward in a planned manner,’ said the President while calling on all to work together to combat COVID-19. 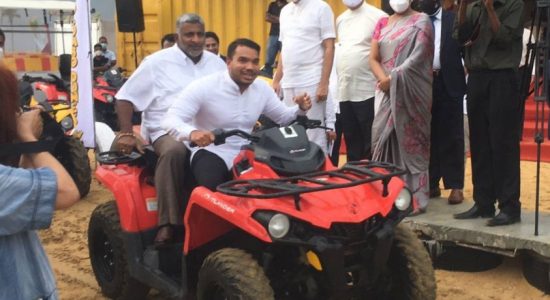