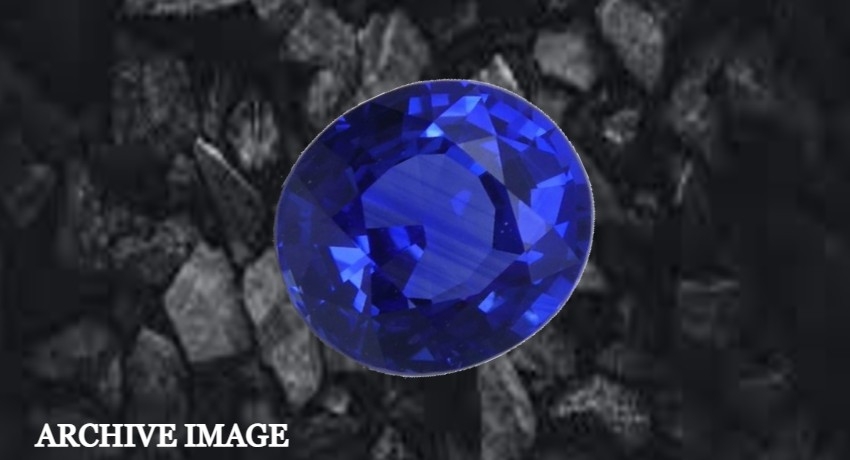 COLOMBO (News 1st); A blue sapphire weighing approximately 80 kilograms was discovered from a mine in Rakwana, Ratnapura on Friday (30).

The licensed mine is owned by Ex-Deputy Minister Earl Gunasekara.

Speaking to News 1st Earl Gunasekara said the gemstone will be put up for auction in China and it was handed over to the Gem and Jewellery Authority.

‘This gemstone is worth approximately USD 50 Million,’ he told News 1st.

According to Earl Gunasekara what was discovered is a blue sapphire cluster.

The National Gem and Jewellery Authority had informed Gunasekera that 3000 carats can be obtained after cutting the cluster of blue sapphires.

Blue sapphires have captured the collective adoration of people across centuries, and are considered a symbol of love, loyalty, power, and wisdom.

These vibrant gemstones have also always held special importance for royalty, starting with medieval kings, who believed the stones would protect them from those who seek to do harm.

Blue sapphires are the most popular and sought-after type of sapphire.

They have been the prized possessions of emperors, kings, queens, and collectors for thousands of years.

The most notable producer of fine blue sapphires is Sri Lanka or “Ceylon” as referred to within the trade.

These stones are followed closely by deposits found in Madagascar, which in many cases, are almost indistinguishable from those found in Sri Lanka.

Sri Lanka recently made global headlines after the World’s Largest Star Sapphire was also discovered from the Ratnapura District.

According to the Chairman of the Gem and Jewellery Authority, the star sapphire weighs 510 kg and is valued at over $200 million.

He believes the value of the Star Sapphire could reach up to $ 01 Billion, as many inquiries are being made to procure the gemstone.