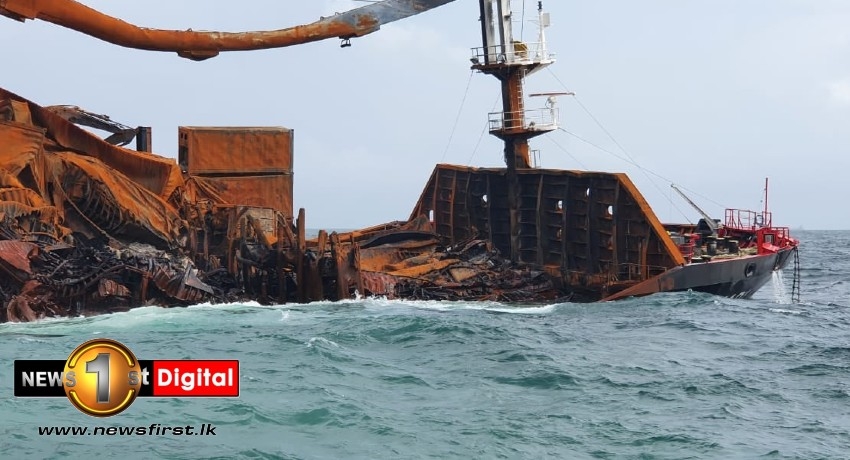 Will Sri Lanka be adequately compensated from X-Press Pearl disaster?

Will Sri Lanka be adequately compensated from X-Press Pearl disaster?

COLOMBO (News 1st); Sri Lanka is now probably for the first time facing a situation of protecting its environment from a shipwreck with hazardous cargo on board.

The Singapore-registered MV X-Press Pearl has been slowly sinking into the Sea of Sri Lanka and the ship aft portion remains on the seabed at a depth of about 21 meters.

This has sparked fears that the 300 metric tons of fuel oil in the ship’s tanks could leak.

But, according to the operators the ship was holding in a stable position, with its stern lodged against the sandy bottom of the seafloor.

X-Press Feeders, operators of the container ship ‘X-Press Pearl’ said that representatives of ITOPF and Oil Spill Response are monitoring updates from the scene and remain on standby to be deployed in case of any reported spill.

Sri Lanka’s Marine Environmental Pollution Authority (MEPA) has repeatedly said authorities were prepared for a possible oil spill, but that the heavy monsoonal rains and strong winds have turned the seas rough and made operations much harder.

However, activists have called on the Sri Lankan government to seek separate international experts for this process.

“When the claim is not completely agreed upon by the insurer, the claimant must obtain the rest of the damage from the wrongdoer. Therefore, in this instance it is the duty of the Sri Lankan authorities to set up independent panels comprising of experts representing various sectors,” said Attorney-at-Law Ravindranath Dabare, the Chairman of the Centre for Environmental Justice.

He said if Sri Lanka does not have any local experts, it is the country’s right to appoint international experts.

“We should never let the wrongdoer only pay the insurance claim and escape,” he stressed adding that it is the duty of the state to ensure that the rest of the damage is recovered.

Environmentalists also decided to sue the Sri Lankan government and operators of a container ship loaded with chemicals and plastic that burnt offshore for almost two weeks.

With the sinking of the ship, the release of the chemicals is a serious risk to the ocean and the coastal ecosystem.

Local fishermen have also voiced concern about the debris from the ship contaminating the Sea of Sri Lanka.

“When we set out to sea after this shipping disaster, we came across dead sea turtles and other dead marine life,” said one local fisherman.

“This is a crime,” said another.

The United States will be providing $100,000 in immediate assistance to support response efforts to the MV X-Press Pearl ship fire

The US Embassy said assistance will deliver immediate support to families whose livelihoods were affected by this emergency and expand ongoing support for response coordination and management.

Sri Lanka is lurking in the dark as concerns grow regarding an oil spill.

Will Sri Lanka be adequately compensated for this disaster which is considered to be Sri Lanka’s worst Maritime Disaster?