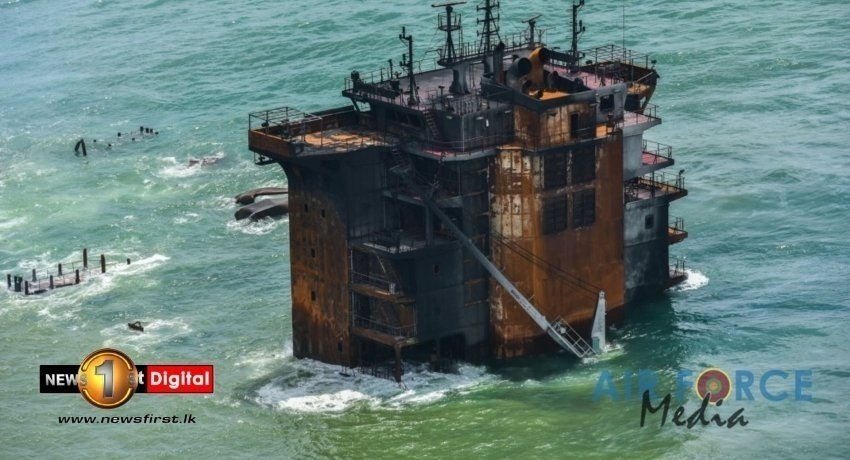 However, Sri Lankan authorities have denied these claims adding there is no such oil spill.

Since the very first day a fire was reported on baord the X-Press Pearl, News 1st raised concerns of an imminent oil spill and the possibility of ocean water contamination.

However, there was no proper response to these concerns from local authorities including the Marine Environment Protection Authority.

“I contacted the Navy and asked them to inquire into this. There are five vessels surrounding the wreck of the X-Press pearl. We obtained data from all five vessels on whether there is an oil spill. All five vessels have responded that there is no oil spill,” he told the media.

The National Aquatic Resources Research and Development Agency has dismissed a statement made by one of its senior scientists, that an oil leak can be observed from the vessel.

NARA’s Senior Scientist K. Arulananthan told News 1st that an oil slick was observed in the seas northeast of the wreck and by the fourth of June this slick was running across 3.5 kilometers and gradually reduced to 0.35 square kilometers.

“We are conducting tests to determine whether this is marine fuel or a slick caused due to the fire. We have obtained samples and are carrying out tests,” he said.

The incident has been described as Sri Lanka’s “worst marine ecological disaster”.

Prof. Charitha Pattiarachchi, an Oceanographer of the University of Western Australia speaking to News 1st dismissed claims of an oil spill noting that ‘The satellite detected different colored water and slight changes in the surface signature.”

“But we know from photographs taken by the Air force and locally, that there is no oil but there is discoloration of water in the vicinity of the ship which is being moved away from the currents from the ship,” he said.

Professor Charitha went on to note that this discoloration is expected because “it’s like washing a container.”

However, Sri Lanka’s Minister of Environment said teams were dispatched to the sea area to collect samples for tests.